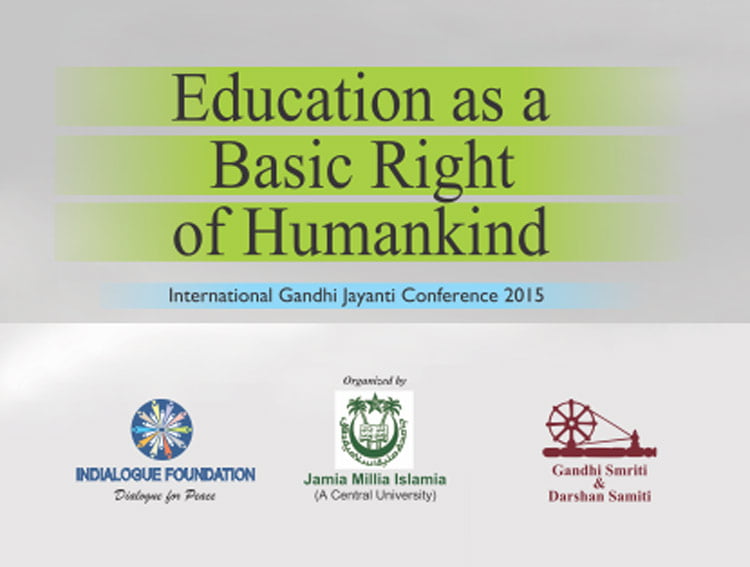 One of the striking activities of Indialogue, is annual Gandhi Jayanti conference focusing each year on different trajectories of Gandhian thoughts and intellects. Research papers addressing Gandhi’s perspective and other treasured philosophical trends are invited from different academic disciplines. Thus, it is a follow-up and extension of the conference series named after Gandhi jayanti Conference earlier embarked upon by Indialogue Foundation themed with “Respect to Sacred”.  In the very following year the Foundation organized the conference on multiculturalism and globalization. Carrying forward its legacy, in 2014 it has followed up with the theme of “Embaracing the Others”.

Acknowledging the unique importance of education in nation building and for individual’s development, and assuming that right to education, like other human rights, is an inalienable and basic right in nature, for which every human being  is equally entitled, regardless of one’s nationality, place of residence, gender, national or ethnic origin, color, religion, language, or any other status, this year, the thematic inspiration of our International Gandhi Jayanti Conference has been set as “ Education as a Basic Right of Humankind” jointly organized by Indialogue Foundation, Institute of Advance Studies in Education, Jamia Millia Islamia (A Central University)  and Gandhi Smriti and Darshan Samiti on the occasion of the International Day of Non-violence October 3-4, 2015.

Objectives of the conference: The primary objective of this conference was to provide a platform for academics, educators, students, experts, and researchers in a collaborative environment to present and discuss issues relating to education and the prospects of its being considered as a basic right of humankind. The conference proved to be the platform for constructive dialogue on education and its different aspects along with furnishing a healthy forum to communicate and discuss research findings and new advances for making education more inclusive with the notion of a human right which is basic in nature and everyone is equally entitled to access it.

A large number of submissions we have received for the conference indicating that issues of diversity and true equal opportunity are crucial for all in the society. Though the selection process was thorough and engaged, leaving of our editorial committee with piqued interest, the review process facilitated exposure to every work submitted within provided time frame to the committee. After the review process carried out by the editorial committee finally 63 regular papers were selected for presentation at the conference.  Additionally, these 63 Interactive Presentations are divided into 12 technical sessions. First day conference proceeding along with the inaugural session was organized at Institute of Advanced Studies in Education, Jamia Millia Islamia, while second or final day proceedings followed by valedictory session and cultural program was conducted at Gandhi Smriti and Darshana Smriti,s arena on October 4, 2015. Together with the invited special sessions (inaugural, valedictory and cultural program), this resulted in a high-quality academic event.

To see the technical sessions details click  Flow of the Conference Program.

The key speakers at the inaugural session focused on inclusive and equitable education that could become a reality if Gandhiji’s views were factored in. Both Mr.Bilal Acikgoz, President of Indialogue Foundation and Dr. Najma Heptulla, Union Minister of Minority Affairs viewed education as the means to develop quality of mind that, in turn would promote peace, equality and development. Prof. Akhtar Siddiqui in his keynote address favored affirmative action to achieve the goal of inclusive education. Affirmative action, he said, does not reduce efficiency but enhances it. Dr. Sudheendra Kulkarni in a thought provoking speech spoke about Gandhiji’s vision of universities reaching out to villages and connecting the masses and stressed on the value of lifelong education, summed up in Gndhiji’s famous statement: “Live as if you were to die tomorrow. Learn as if you were to live forever”.

All the paper presenters who spoke at the twelve sessions, in various ways dealt with the value of education in the Gandhian sense of enhancing the human capital. The sessions were devoted to the Relevance and Significance of Gandhian Education in the present century, the enabling measures to make Education as a basic right of Humankind a reality, inclusive education to meet the challenges of gender and less privileged  sections of society, technology in the service of education for all, the challenges confronting school education, higher education and adult education, holistic development of students through sports, music and health education, and last but not the least education for the promotion of peaceful coexistence and social harmony, factoring in the ethical problems before our present knowledge society.

Suffice it to say the emphasis was to complement the learning of the three ‘R’s (reading, writing and arithmetic) with three ‘H’s (hand, head and heart).  The core agreement underlying all the presentations was the right to education can become a reality if education becomes truly transformational and promotes a healthy development of the individual, the nation and the world.

Human welfare is directly proportionate to its advancement in all spheres of learning that contributes to the physical, moral and intellectual growth of the people. In a globalized world, the value of education in promoting peace, cooperation and progress among mankind can never be overestimated. Gandhji wrote: “Education should bring about a silent social revolution to free the minds from the cobwebs of superstition, ignorance, illiteracy and the psyche of servitude. The value of education lies in its potential to sustain and safeguard humanity from insensate and imbecilic annihilation.”

The full coverage of proceedings and highlights of the conference may be found online here; Twitter link

After the welcome address given by Mr. Dipanker Shri Gyan J.A.S, Director, Gandhi Smriti & Darshan Samiti, key addresses by the guests of honour emphasized that these kinds of conferences will definitely stimulate the academics, scholars and concerned ones to ponder the different issues which will help in making education more inclusive and accessible to everyone. Chief guest Padmashree Shri Ram Bahadur Rai, arguably discussed the relevance of Gandhian philosophy and its implications in today’s scenario. In her concluding remarks, Prof. Hema Raghavan urged that Gandhji’s ideas on education were not limited to education as a basic right of children alone, but were all-embracing in their reach to make it a worldwide human right for men and women of all ages in order to be trained holistically in body, mind and spirit and become true citizens of the world. Finally, with the vote of thanks proposed by Mr. Nurdin Kaparov, Director Delhi Office, Indialogue Foundation, valedictory session came to an end followed by the distribution of certificate and cultural program at Gandhi Smriti & Darshan Samiti.

A downloadable pdf recap of the conference proceeding book can be found here.

A vibrant confluence of cultures and languages is going to hit the Indian shores for the first time with the fourteenth edition of International Festival of Languages and Culture going to take place in the Capital. By Sharang Bhaskaran.