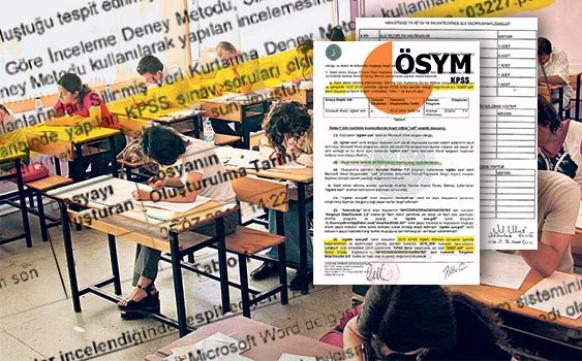 The allegations of cheating first emerged in August 2010 after more than 3,227 people answered most or all of the questions on the KPSS correctly, a first in Turkey. The unprecedented success led to claims that some of the candidates had either cheated during the test or obtained the questions ahead of time. Some of the most successful candidates were either married to each other or were friends living in the same house. Claims emerged that a copy of the KPSS questions had been obtained before the exam day and that they had been shared among thousands of candidates.

Although no progress have been made in the investigation in the past five years, the government has recently ordered the Student Selection and Placement Center (ÖSYM), an institution administering nationwide examinations in Turkey, to examine claims of cheating in 2010. The move raised concerns that the government, which has been waging a war against the Hizmet movement, aims to use the cheating scandal to frame the movement as being involved in an illegal activity.

The Zaman daily on Saturday published documents revealing that the plot against Hizmet was planned back in 2010. As part of the investigation launched into the scandal, Berat K. who works at a Hizmet-affiliated association and Baki S., who allegedly received the questions from Berat K. beforehand, were detained.

The computers at the association were seized as part of the investigation but experts found no trace of the questions although Baki S. said in his testimony that Berat K. had sent him the questions via e-mail. Berat K. denied the accusations.

After five years, the computers were re-examined by the Scientific and Technological Research Council of Turkey (TÜBİTAK) following a major reshuffle at the council by the government and the questions were found in the new examination.

However, a 2010 criminal report by Gendarmerie General Command’s Criminal Investigation Department obtained by Zaman revealed that the questions were recorded in Baki S.’s computer five days before the exam, refuting his claims that he had received the questions via e-mail from Berat K.

The name of the file containing the questions also adds to suspicions over a plot against Hizmet. The file is named “3227,” exactly the same number with the number of test takers who answered more than 100 questions correct in the exam.

The fact that the number of people who would score high points in the exam was known beforehand raises questions. However, many test takers said during their testimony that they received higher points than they expected. After it emerged shortly after the exam that answer sheets were destroyed by ÖSYM, claims were voiced that answer sheets had been falsified.

Since a major corruption investigation launched in December of 2013, which implicated government ministers and then Prime Minister Recep Tayyip Erdoğan’s inner circle, Erdoğan has declared a “war” against Hizmet. He insulted members of the faith-based movement numerous times and directed serious accusations at them. He invented the term “parallel structure” to refer to followers of the Hizmet movement that was inspired by Gülen, particularly followers within the state bureaucracy.

Erdoğan, now president, and the government framed the corruption investigation as a “plot against his government” by the Hizmet movement and foreign collaborators. He held members of the movement responsible for many negative developments in Turkey although he has so far failed to prove his claims.