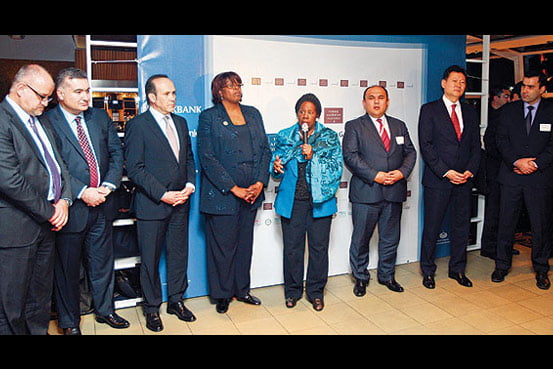 The third annual Turkic American Convention began on Tuesday in Washington, D.C., in an opening gala cruise with the participation of politicians from the US, Turkey and the Turkic republics.

Organized by the Turkic American Association (TAA), which represents six regional federations and over 200 community associations, cultural centers, business associations and educational institutions in the US, the opening gala hosted around 400 guests.

Texas Congresswoman Sheila Jackson Lee, who spoke at the opening on the Potomac River, said, “I’m here to extend a hand of friendship, to indicate to you that we will be introducing the 21st Century Energy Caucus in Congress with members from both the Senate and the House.” Stating that she embraces the Turkic world, Lee said that with the sizeable Turkic population in Texas and the US as a whole, there is cultural collegiality between the US and the Turkic world.

The Turkish ambassador to the United States, Namık Tan, praised the TAA as “one of the most important, prominent, prestigious civic institutions of the Turkic world.” Commenting on the work of the TAA, Tan said, “They started just three years ago and established themselves as an advocacy group which is so energetically and ably reaching out to every walk of life in this great country.”

Expressing appreciation for the work of TAA’s volunteer staff, Tan said diplomats like himself are paid for what they do, but that there are a lot of workers and members of the TAA who do not get paid for the work they do.

As far as Turkish-American relations are concerned, Ambassador Tan said the two countries are indispensible for one another. “This relationship is important for stability and peace in our region,” expressed Tan, who said the US represents the power of diversity and the values “we all cherish.”

Referring to bilateral relations between Turkey and Azerbaijan, Azerbaijan’s ambassador to the US, Elin Suleimanov, supported the description of the relationship as “one nation, two states” as he called for “one nation and multiple states,” inviting the wider Turkic world to work together.

Kazakh Ambassador to the United States Kairat Umarow also talked about the importance of cooperation. “This is quite a moment for all of us to be together talking about common projects, about common ideas,” he said while thanking the TAA for bringing the representatives together.

Complimenting the TAA’s cultural activities that bring the Turkic diaspora together in America, Kyrgyz Ambassador to the US Muktar Djumaliev also thanked the US for allowing them to build good relations among Turkic states and the US.

Talking about his visit to Turkey, Alabama Congressman Mo Brooks said that “being there educated me a lot. We better understand Turkey and the country, and more importantly Turks as people.”

“I hope that US-Turkish relations will continue to improve, that we can find economic paths that are mutually beneficial and, equally important, that we can do what is necessary to help make sure that there is peace in the Middle East,” he further commented.

Justice and Development Party (AK Party) İstanbul deputy Ahmet Berat Çonkar congratulated the TAA for the annual convention and said discussions during the convention will further strengthen the relationship between the US and Turkic countries.

Republican People’s Party (CHP) Deputy Chairman Bülent Tezcan said that in a world that is becoming ever smaller and more competitive, Turkey needs to be in closer cooperation with its friends in the Turkic world.

Themes of energy, trade and innovation

Speaking at a press conference on Tuesday, Faruk Taban, the president of the TAA, said the major themes at the convention this year will be issues regarding energy, trade and innovation. The sessions will be held on Wednesday in cooperation with the Turkish Confederation of Businessmen and Industrialists (TUSKON). Taban said the organization aims to bolster cooperation between the US and the Turkic republics in the field of energy.

Noting that the US has a keen interest in the energy resources of Central Asia, Taban said the TAA aims to bring the issue to the table for discussions over what can be done in the face of the fact that Russia and China are also eying the resources in the region.

TUSKON President Rızanur Meral, whose organization is partnering with the TAA to host the convention, says the goal of the gathering is to raise awareness on the importance of US-Turkish relations and to explore opportunities in the field of energy and trade in Turkey. He also noted that Turkey’s economic relations with the US are short of their potential and that by supporting the convention TUSKON hopes to create momentum in bilateral economic cooperation. “TUSKON gives great importance to ties with the US,” Meral added.

Meral also said they expect the convention to create a kind of interaction and communication that would contribute to the settlement of the Armenian dispute, which is a headache for Turkey every year, and which will worsen by 2015, the centenary of the so-called Armenian genocide that occurred during World War I.

Meral pointed out that TUSKON sent over 400 businessmen from Turkey to various states in the US last year in order to seek cooperation in a number of fields.

The conference, which will host panel discussions with participants from seven countries, is sponsored by Ziraat Bankası, Halkbank, the State Oil Company of the Azerbaijan Republic (SOCAR), Today’s Zaman, Turkish Airlines (THY) and the Turkish Review.

Last year, 59 members of the US Congress, including eight senators, were among the over 700 guests at the convention. Taban said the TAA expects a larger representation from Congress this year.

ATUL ANEJA  They are an unusual group of Turkish businessmen endowed with a strong work ethic, a great spirit of public service, and who revel in camaraderie. Many of them are young first generation “capitalists”, emerging from humble backgrounds and hailing from the small towns and villages of Anatolia — once disparaged by Europhiles as […]