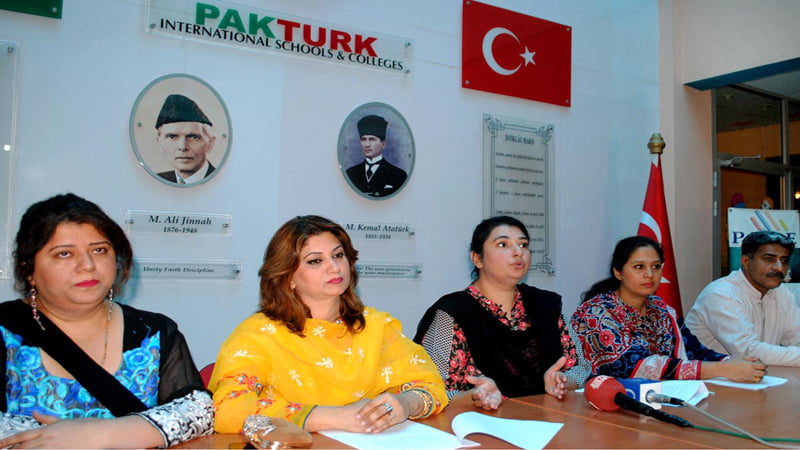 Graduates of the Pak-Turk Schools have voiced their concerns over the reported transfer of administration of the schools to the Turkey-based Maarif Foundation.

The graduates including Ganwar Bhatti, Ahsan Bhatti, Ateequllah and others during a press conference held at KPC on Saturday said that politics must not influence the education and the future of our new generations .

“We have gone through the school curriculum during our time and have not found them imparting any extremism ideology or anything that goes against the interests of Pakistan,” said one of the graduates, Ganwar Bhatti.

They said that the Pak-Turk school teachers will be replaced with the teachers belonging to a recently registered foundation in Turkey, Maarif Foundation. We have huge reservations regarding the experience and conduct of its staff who are being equipped with short English courses at a academy to teach the students, they said.

They said that the foundation was offered to take over other public schools but they refused every option which depicts the ill-intentions of the group against the Pak-Turk system.

The school administration believes that the action is taken to appease Turkish president Recep Tayyip Erdogan, who believes that the school promotes and teaches his arch-rival and cleric Fetullah Gulen’s teachings. “We have gone through the school curriculum during our time and have not found them imparting any extremism ideology or anything that goes against the interests of Pakistan,” said one of the graduates, Ganwar Bhatti.

They request the government to allow the Turkish teachers to stay in Pakistan and to stop Maarif from taking over the system. It is need of time to revise the decision to be taken regarding the fate of the Turkish teachers and the schools and to take action against such moves as future of our children can be safe.