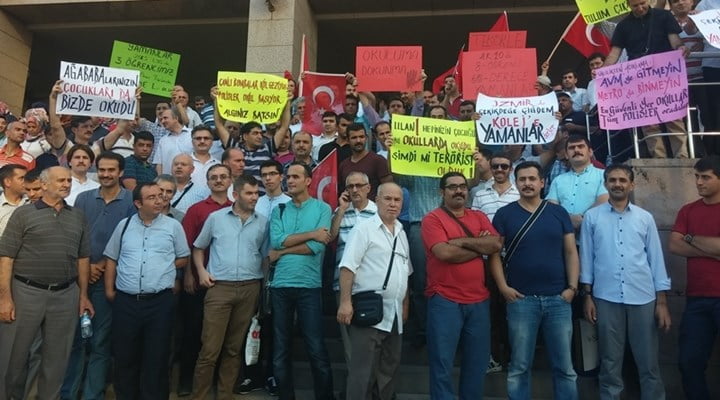 Educational unions are in uproar over the police raids of various teaching institutions nationwide. Referring to the latest raids as something from a comedic farce, union representatives stressed how such operations were against the law.

Union of Active Educators (Aktif Eğitim-Sen) Chairman Osman Bahçe criticized the raids by saying that all of the raids clearly known as being politically motivated.

“If similar raids were conducted against state schools, the none of them would pass the inspection,” Bahçe said.

Calling the raids a witch hunt, Education Personnel Union (Eğitim-Sen) President Kamuran Karaca said “the raids are conducting in an aim to discredit a group of people in the country. We really need more democracy these days.”

The Turkish Education Personnel Union (Türk Eğitim-Sen) President İsmail Koncuk stated all of the raids are against the law. “The government is continuing to take measures that violate the law,” says Koncuk adding “they are trying to find any means to cause harm,” he added.

A number of private and prep schools that are sympathetic to the Gülen movement have been targeted by the Justice and Development Party (AK Party) government after a major graft investigation that implicated then-Prime Minister and current President Recep Tayyip Erdoğan and other top AK Party figures was made public on Dec. 17, 2013.

Erdoğan accused the Gülen movement of plotting to overthrow his government. In May 2014, Erdoğan publicly advised AK Party supporters not to send their children to schools affiliated with the movement, vowing, “We will not even give water [to the movement’s members].” He has also said he would carry out a “witch hunt” against anyone with any links to the movement. Erdoğan has also ordered officials in AK Party-run municipalities to seize land and buildings belonging to the Gülen movement by any means necessary. The movement strongly rejects the allegations and no indictment has yet been brought against it.