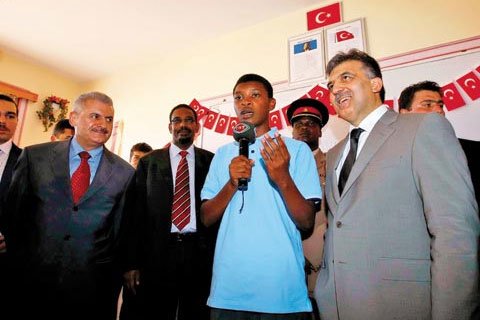 President Abdullah Gül attended the inauguration of a Turkish school in Nairobi on Saturday, where he traveled last week to improve political and economic relations between Turkey and Africa. The inauguration of Işık Lisesi (Light High School), which accepted its first students last year, was attended by President Gül, his wife, Hayrünnisa, and a number of local officials.

Gül highlighted the importance of the bridge of friendship between Turkey and Kenya in a speech he delivered during the ceremony.

“I’m proud that Turks serve the development of Kenya through education. I believe this school will strengthen the ties of fraternity and brotherhood between the two countries. I extend my thanks to all those who are helping Turkey’s voice be heard on this continent,” Gül stated.

Gül later visited the classrooms and was briefed on the quality of education being offered there. He also spoke with Turkish teachers working at the school.

The Turkish president was met with a surprise in one of the classes he visited. A Kenyan student sang a folksong from Gül’s hometown, Kayseri. The students later presented Gül and his wife with a leather-frame mirror.

President Gül and his wife later visited the Nairobi National Park and went on a brief safari tour, observing cheetahs and taking many photos at the park. They also posed for souvenir photos at the park with Kenyan children.