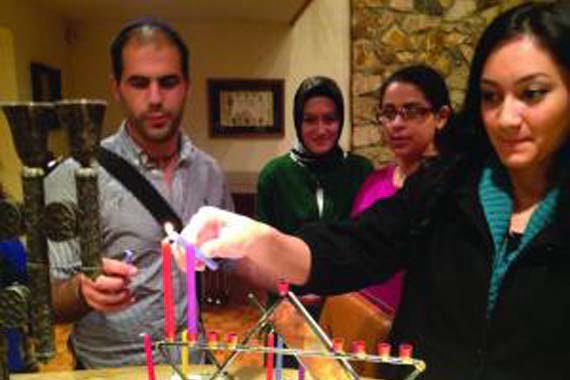 Hayrunnisa Kalac, a teenager from northern New Jersey who attends high school in southern Brooklyn, stepped into a taxi outside of Port Authority Bus Terminal Sunday morning and told the driver her destination: the Museum of Jewish Heritage – A Living Memorial to the Holocaust in Battery Park City.

The driver did a double take, she says. He noticed the hijab, a fashionable black-and-white silk scarf tied around her head. And her modest ankle-length and elbow-length clothing.

“Jewish?” the driver said, repeating the first word of the museum’s name. “You look Muslim.”

Kalac, 17, a member of a family from Turkey that lives in Somerset, is Muslim.

“Is there a problem?” she asked.

The driver — apparently neither Jewish nor Muslim — was surprised that an identifiably Muslim young woman would be going to a prominent Jewish institution.

“I explained my program to him,” Kalac said.

Her program is Young Peace Builders, which was launched three years ago by the Kings Bay Y, a Jewish community center, and the Amity School, a private K-12 school that admits students from all ethnic and religious backgrounds but serves a primarily Turkish-Muslim student body. The Y and the school are both located in southern Brooklyn, an area that is home to large numbers of Jews, many with roots in the former Soviet Union, and Turkish Muslims.

Young Peace Builders, (youngpeacebuilders.org), which was founded with seed money from UJA-Federation of New York, is the public face of an increasingly close relationship between the neighborhood’s Jewish and Muslim residents. And it is also a de facto leadership-training program that serves as a role model of interfaith cooperation but is largely unknown outside of the neighborhood.

“This can serve as a template for Jewish-Muslim relationships,” said Leonard Petlakh, executive director of the Kings Bay Y. Rabbi Robert Kaplan, who coordinates the Jewish Community Relations Council of New York City’s outreach to various religious and ethnic groups, calls the Y and Amity School “mainstream organizations … within their [respective] communities,” with the ability to influence their own communities. “There is no reason there should not be more and more” Jewish-Muslim programs like those in southern Brooklyn.

Programs like the Young Peace Builders, and a leadership-level project under the auspices of the Brooklyn branch of the Turkish Cultural Center, are flourishing, Rabbi Kaplan said, “because the leadership on both sides have found this to be beneficial. Other people can do it.”

The two religious groups, who were neighbors but virtual strangers to each other, were brought together by State Assembly member Steven Cymbrowitz, whose district includes Sheepshead Bay, Manhattan Beach and part of Brighton Beach; his constituents are Jews and Turkish Muslims. After participating in a legislators’ mission to Turkey a few years ago, he brought leaders of his neighborhood’s Jewish and Turkish communities together.

“It’s through education that we can get to understand each other,” Cymbrowitz told The Jewish Week.

The Jews and Turkish Muslims in southern Brooklyn have established a relationship, leaders of the joint activities say, which transcends the tense ties between the Israeli and Turkish governments that have characterized the countries’ political relations in recent years; in many cities, other Jewish-Muslim dialogue groups set up in recent years have floundered on the rocks of the Middle East’s shaky peace process.

In the latest sign of the two countries’ relations, U.S. Secretary of State John Kerry, during a visit to Turkey last week, urged government leaders there to follow through on their recent pledge to normalize relations with Israel. Relations had deteriorated after the Gaza War, especially since eight Turks and one American of Turkish descent were killed when the Israeli military intercepted and boarded the Mavi Marmara ship that was attempting to run Israel’s naval blockade on supplies to Gaza.

The Jewish-Muslim relationship in southern Brooklyn functions at both the grassroots and leadership levels, including biweekly meetings of the high school-age girls who take part in the Young Peace Builders, and programs like joint trips to Israel and Turkey coordinated by the Y and the Turkish Cultural Center.

The leaders and YPB teens first have to contend with some outsiders’ doubts. “People have the expectation that we” — Jews and Muslims — “are not going to like each other,” said Corrina Blau, a Y member and YPB participant.

The girls in Young Peace Builders have visited Washington and Boston together, Jews and Muslims sharing hotel rooms, and prepared food together for the Masbia Food Pantry in Flatbush; celebrated each other’s religious holidays together. The Turkish Cultural Center donated new furniture to the Mazel Day School and to an annex of the Y, both of which suffered extensive damage in Hurricane Sandy.

This week, on the eve of Yom HaShoah, the girls went to the Museum of Jewish Heritage.

For four hours, they walked through the exhibits on pre-Holocaust European Jewish life and on the Shoah experience, under the leadership of Paul Radensky, the museum’s manager of education programs. They listened in rapt silence as a Polish-born Holocaust survivor told her life’s story. They talked, in their spare time, about spring breaks and college admissions tests.

“We’re just teenagers,” said Kalac, who spent most of the morning alongside Blau, who attends Edward R. Murrow High School. The pair has become fast friends since meeting at YPB, keeping in touch via social media.

Kalac’s statement is not only a demographic observation, but an affirmation of the program’s raison de être. The founders from both the Jewish and Turkish communities decided to start with teens, who are less set in their ways and more open to contacts with other communities.

“The teenagers can be molded,” said the Kings Bay Y’s Petlakh.

The Jewish and Muslim participants — so far, the program is girls-only — “want to know each other on a deeper level,” said Alla Leventul, who coordinates the YPB activities at the Kings Bay Y. “They get to experience a new culture.”

Peace Builders is one of 53 student clubs at the Amity School. Kalac, who’s in her second year there — she lives during the week in the school’s dormitory — says she heard good things about the program from other students and decided to apply.

“It looked like a fun club,” Kalac said. She wanted to meet people she hadn’t known, maybe visit some places she hadn’t seen.

“We’re planting the seeds of something that can be very big” — an example of tolerance, she said.

“We have very idealistic students,” said Aysenur Akoglu, who coordinates the YPB activities at the Amity School. “They know not to generalize” about non-Muslims.

This attitude, say participants in the Jewish-Turkish activities, is a reflection of the Jewish community’s centuries-long history as residents of the Ottoman Empire; Turkey, home to many ethnic and religious groups, traditionally was more tolerant of minorities than many Islamic societies.

The word about the Young Peace Builders is slowly spreading to the city’s wider Turkish and Muslim society, she said. “The girls tell their friends. The girls tell people on the street.” Akoglu said she sees a change in the students’ behavior, in how they “talk about other communities.”

“It’s getting out — our friends are hearing about it. They want to join,” Kalac said. “I want to visit Israel,” she said. “She [Blau] wants to visit Turkey.”

Akoglu says she gets frequent calls from parents who want to enroll their children in YPB.

Turkey, a secular country for most of the 20th century, became the first Muslim-majority land to recognize the State of Israel, and established close political, economic and military ties for several decades. But relations deteriorated as Turkey’s government, under the leadership of Prime Minister Recep Tayyip Erdogan, became increasingly militant Islamic in recent years, downgrading its ties with Israel, expressing its support for the Palestinian cause, and loudly criticizing Israeli behavior. Erdogan has called Zionism “a crime against humanity.”

In one possible sign of warming, Israeli Prime Minister Benjamin Netanyahu, at the end of President Obama’s recent visit to Israel, apologized to Turkey for its citizens’ deaths in the Mavi Marmara boarding, and agreed to compensate the families of the victims; and Erdogan, in accepting Netanyahu’s apology, spoke of the “strong importance of Jewish-Turkish ties.”

This is of peripheral interest to the YPB participants.

Politics, “the 64-pound gorilla in the room,” does come up, “obviously,” said Petlakh. But it does not color relations of the teens, he said. “Governments come and go. Governments change. Policies change.”

The purpose of the group is to “build relationships,” he said. “I want us to be friends.”

“We don’t talk about politics,” Blau said. The actions of governments do not influence the work of the program and the friendships it has helped form, Kalac said.

She says she had little knowledge about the Holocaust before visiting the Museum of Jewish Heritage on Sunday.

She and the other teens heard survivor Sally Frishberg urge them to “do whatever you can to make a difference.”

She says she is already committed to the cause of tolerance.

Blau and Kalac tell the story of a restaurant where the group ate during its visit to Boston a few months ago. The owner, realizing that the girls wearing the hijab were Muslims, asked who the diners were. Muslims and Jews, he was told.

“Don’t you guys hate each other?” he asked.

Blau answered with a rhetorical question: “Does it look like we hate each other?”

The Gulen Institute Youth Platform has announced its “Annual Essay Contest” topic for 2013: Hospitality in the Global Village. The Gulen Institute Youth Platform encourages all high school students from the U.S. and from around the world to participate the contest. The youth platform hopes that this essay will help young minds define problems related […]

ORHAN AKKURT, NEW YORK While speculation and news reports among some national media outlets have claimed that prominent Turkish Islamic scholar Fethullah Gülen lives in a luxurious mansion in Pennsylvania, close friends and lawyers of the opinion leader said Gülen lives in what they call a social facility belonging to a charity. In response to […]