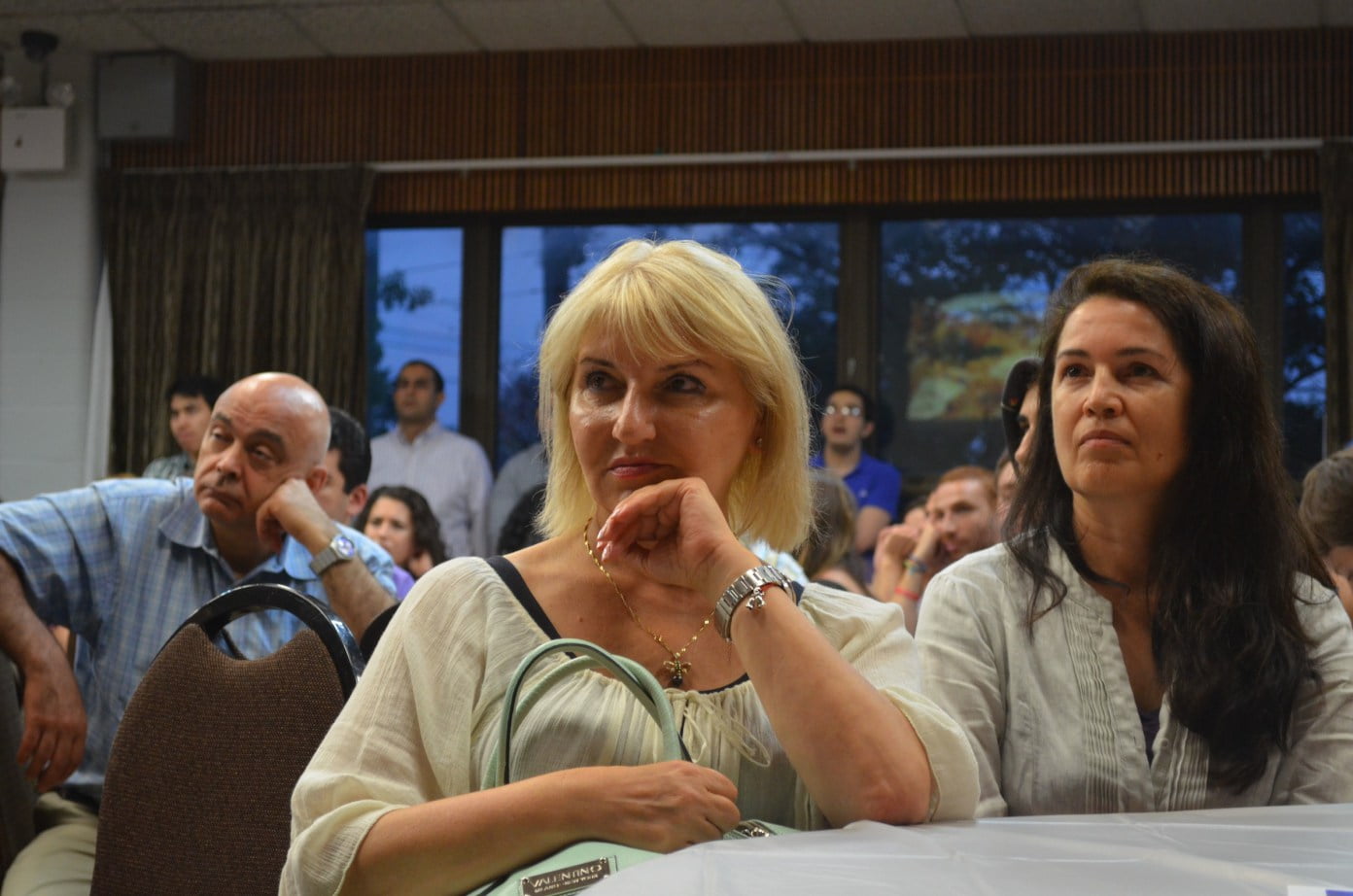 In the foreground: Polena Gillerman is Jewish and Rida Sadykova is Muslim. They are longtime friends. (Photo: Alex Ellefson / Sheepshead Bites)

Iftar is the meal that breaks the daylong fast during the Muslim holy month of Ramadan. Imam Ibrahim Sayar, president of the North East Islamic Community Center, explained that during Ramadan Muslims are encouraged to share Iftar with their friends and neighbors.

“In Muslim custom, Ramadan is like 30 days of Christmas. During fasting, it is almost a sin for someone to break their fast alone,” he said.

More than 250 people, including City Councilmen Alan Maisel and Chaim Deutsch, attended the feast at the Kings Bay Y, which was co-hosted by the Turkish Cultural Center of Brooklyn.

This is the second year that the Turkish Cultural Center of Brooklyn and the Kings Bay Y have co-hosted an Iftar dinner together.

Suleyman Aydogan, director of the Turkish Cultural Center of Brooklyn, explained that during Ramadan his organization holds many Iftar celebrations throughout the five boroughs with people of all different faiths.

“We want to build friendships with people of different communities, different ethnicities, and different religions. That’s our main purpose,” he said. “This is an opportunity for everyone to learn what true Islam is.”

The Iftar celebration at the Kings Bay Y featured Sufi and Hebrew music and provided both Halal and Kosher food. Before the dinner, Iman Sayar and Rabbi Shlomo Segal spoke about overcoming cultural differences and promoting tolerance and respect.

Segal noted that the Jewish community was currently observing the Three Weeks, which includes two days of fasting and mourns the destruction of the first and second Holy Temple in Jerusalem.

“Our sages teach that the temples were destroyed due to baseless hatred. We hated one another,” he said. “We each need to judge others with the same magnitude and tolerance and understanding that we would seek for ourselves.”

Longtime friends Polena Gillerman, who is Jewish, and Rida Sadykova, who is Muslim, explained how they learned to speak to each other about some of the world conflicts between their two faiths.

“We are definitely talking about some of these conflicts, but it’s very easy because we try to listen to each other’s side. We just understand that we each have our own points of view,” said Gillerman. “If people can be friends and can understand each other, then we can talk about all the things that are going on around the world.”

A French editor-in-chief has praised the anti-terrorism messages in an article written by Turkish Islamic scholar Fethullah Gülen and published by a prestigious French daily last month, describing them as revolutionary and one of the “signs of hope” in 2015, which he said was marked by terror and fear.

The Chatham United Methodist Church hosted its 6th Annual Abraham Interfaith Lunch on Tuesday, April 30th. The theme of the event was to embrace faiths of all kinds while joining together to help refugees in need.