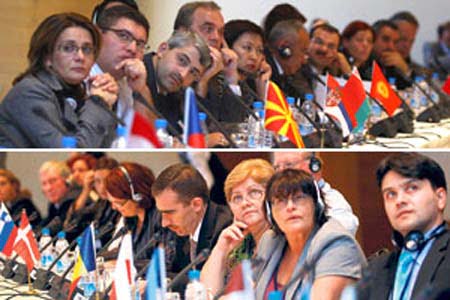 Represantatives from around 30 countries are in İstanbul for a conference titled "Tolerance and Dialogue in Education," held to bring European and Asian experts together for discussions on education

“What we are doing here is for the better future of our people, to tackle global threats and institute global peace,” said Rostislav Rybakov, head of the Institute of Oriental Studies, during a conference held in İstanbul on Monday to discuss tolerance and dialogue in education.

The Dialogue Eurasia Platform (DEP) together with the İstanbul Municipal Education Administration and the İstanbul 2010 European Capital of Culture Agency opened a four-day conference in İstanbul on Monday under the title of “Tolerance and Dialogue in Education.”

The primary purpose of the meeting is to bring Europeans and Asians together and propose grounds for discussion. Its organizers also aimed to launch the unofficial opening of the İstanbul 2010 European Capital of Culture celebrations in terms of education. Invitations sent to 42 countries and representatives from 25 countries joined the conference, which plans to bring related educational and dialogue organizations together to deal with tolerance and dialogue in education.

The opening ceremony of the conference started with a presentation on the importance of intercultural and interfaith dialogue and Dialogue Eurasia Platform’s contribution to this.

The presentation stressed the importance of dialogue and tolerance, and people were called on to respect diversity and differences while stressing the significant role of peace and love. “The Dialogue Eurasia Platform is blind to differences, race and diversity and does not recognize any conflicts,” it said.

Throughout the conference discourse on peace, love, respect of diversity dominated the speeches by all speakers. The speakers were representing both educational ministries of different countries and educational organizations from various countries. “Our differences are our beauty,” said Yıldız, head of İstanbul Education Department. “We educators are responsible for building an environment of tolerance and dialogue. Our job is to contribute to universal peace.”

The head of the Institute of Oriental Studies, Rybakov, listed seven guiding principles for global peace. “İstanbul is the seventh golden principle. Its mosaic of different cultures and religions is a wonderful sign of coexistence and respect for diversity,” he said. Drawing similar lines between Indian peace activist Mahatma Gandhi and Turkish scholar Fethullah Gülen, Rybakov said Mahatma Gandhi had certain political motives yet Gülen is a “gardener.” “Fethullah Gülen is an initiator of a new culture, a new man who is ready to love,” Rybakov concluded.

The conference is expected to finish on Sept. 30 with policy recommendations for different organizations and ministries of education with respect to dialogue and tolerance in education.