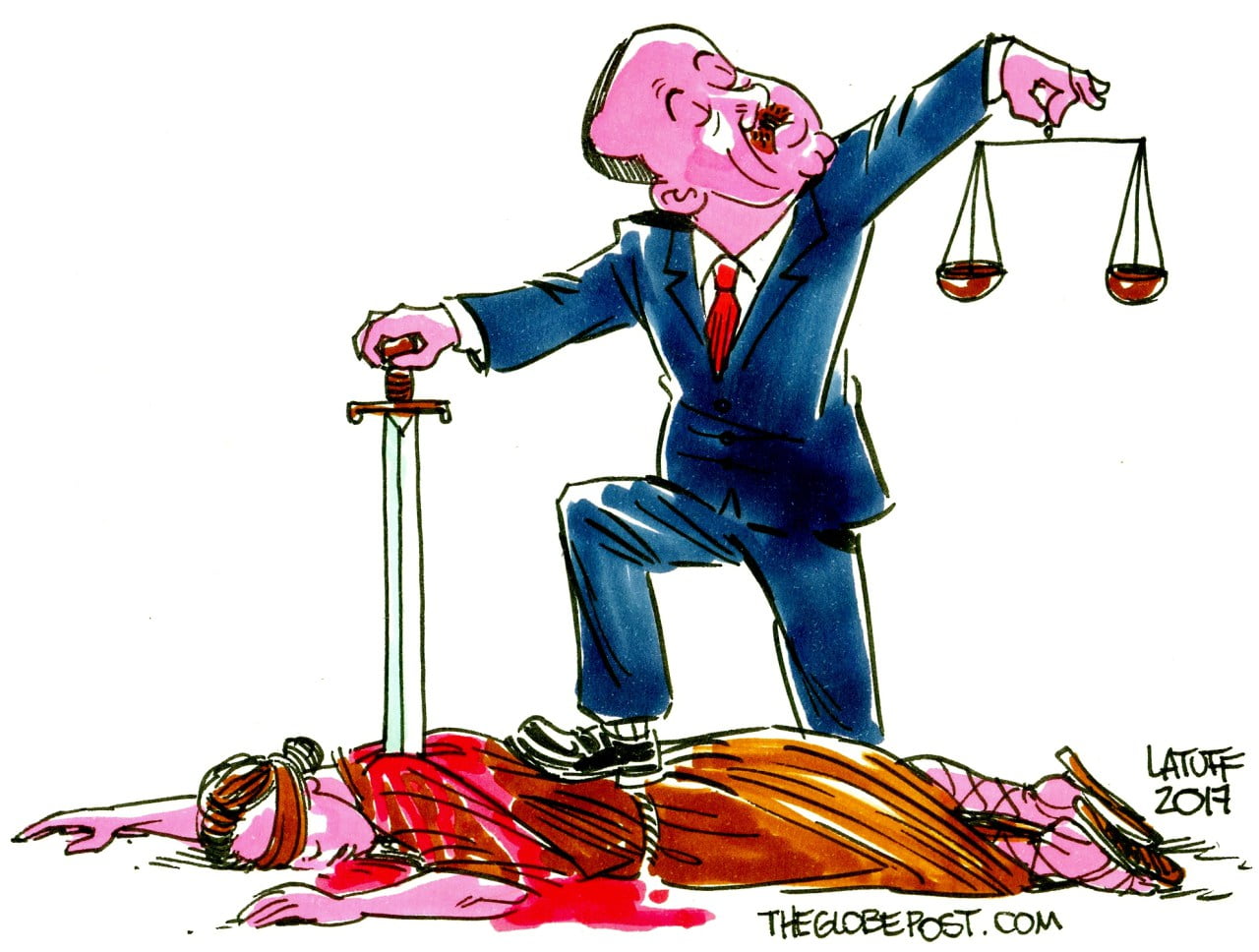 Stabbing Rule Of Law In Turkey — Cartoon/Latuff (The Globe Post)

In the first of a three part series, contributing editor-at-large Tess Lawrenceuncovers troubling evidence of corruption in Turkey’s ruling Erdogan family, as well as disturbing links to the Trump administration.

For years, he’s been withdrawing from any pretext of the rule of law and adherence to basic human rights.

And we are among those in this mightily troubled world who have averted our sly and politically expedient eyes.

ERDOGAN WANTS USA TO EXTRADITE GULEN BACK TO TURKEY

The former prime minister, now president and wannabe dictator, has demonised his former ally and loathed nemesis, Muhammed Fethullah Gülen — an imam and internationally reknowned scholar who stands accused by Erdoğan as the mastermind of the botched coup.

He has also demanded from successive Presidents Obama and Trump that they extradite him back to Turkey, from his Pennsylvania home in the United States, where undoubtedly a tortuous, humiliating and greedy public execution awaits him.

Gulen is the reason why Erdoğan will reinstate the death penalty abolished in 2004 if he has his druthers. The latter is incapable of combating or engaging with Gulen on an intellectual, philosophical or even a political level. So he will kill him.

Gulen’s vast and influential worldwide network also extends to Australia. It includes the Alliance for Shared Values, collectively known as the Gulen Movement, and in Turkey and elsewhere called Hizmet, the word for service.

It should be said that Erdoğan has failed to provide any credible forensic evidence that Gulen had any role whatever in the coup attempt.

The same can be said for the thousands of lives that have been disrupted in Turkey, who are now refugees in their own country — some simply because they attended a Gulen school or teaching facility.

Erdoğan and his government constantly refer to Gulen and followers as terrorists.

“This group is an international group. Their leader is based in the States and they are staging a coup in a democratic country…Of course, the decision needs to be made by the Australian authorities concerning the people who are affiliated with a terrorist group in an allied country.”

But lack of proof has not deterred Erdoğan from his compulsive tormenting and relentless vindictive pursuit of Gulen.

Indeed, his lawyers have been busy little drone bees. Here’s some of the buzz.

It is no accident that on or about the same date as Turkey’s referendum to grant dictatorial powers to Erdoğan, they filed a truckload of complaints in the U.S. against prominent figures, including former CIA chief John Brennan and former Obama-appointee U.S. Attorney Preet Bharara, who refused to resign and was sacked, despite earlier being personally asked by Trump to stay on.

‘A complaint, filed with the public prosecutor’s office in İstanbul, alleged that 17 people including Senate Minority Leader Chuck Schumer, former Manhattan US Attorney Preet Bharara, former CIA director John Brennan, former CIA senior official and other (sic) of several books, the former deputy director of the Central Intelligence Agency and former under-secretary at the Department of the Treasury David Cohen are part of group that has been systematically targeting Turkey by various plots including with the failed coup bid of July 15, 2016.’

The group was accused of colluding with Gulen in the coup attempt and other matters, including orchestrating revelations in the media about the Erdoğan family, their coterie, as well as sons of various ministers.

These involved allegations of shonky money dealings and illegal activities to do with banks, gold bullion, smuggling, arms trafficking, violating sanctions against Iran, and mega million dollar donations made to a foundation for the underprivileged called Togem-Ger (Social Development Center of Education and Social Solidarity Association) run and founded by his wife, Emine, although Erdoğan denies that neither he nor his wife were founders.

The charges Erdoğan makes against Bharara in particular are payback because he was largely responsible for securing the arrest of a major Erdoğan family “benefactor”.

“GOLDFINGER” ZARRAB NABBED AS HE JETS INTO MIAMI VICE TRAP

The man nicknamed “Goldfinger” was arrested on March 19 last year and subsequently charged with two others for conspiring to evade U.S. sanctions against Iran, money-laundering and bank fraud.

IA understands he was apprehended upon arrival for a holiday in Florida, with his wife and daughter, after a massive operation involving several policing and intelligence agencies and extensive surveillance.

IRAN CONFIRMS 2011 THE “YEAR OF THE ECONOMIC JIHAD”

In a press statement issued by his office on March 21st last year, then U.S. Attorney Preet Bharara announced details of Zarrab’s arrest and the charges against him and alleged co-conspirators.

The statement refers to a letter drafted in 2011 from the Iranian Government to the General Manager of the Central Bank of Iran, confirming and agreeing to the Zarrab credentials.

ZARRAB, JAMSHIDY, NAJAFZADEH, and their co-conspirators used an international network of companies located in Iran, Turkey, and elsewhere to conceal from U.S. banks, OFAC, and others that the transactions were on behalf of and for the benefit of Iranian entities.  This network of companies includes Royal Holding A.S., a holding company in Turkey; Durak Doviz Exchange, a money services business in Turkey; Al Nafees Exchange, a money services business; Royal Emerald Investments; Asi Kiymetli Madenler Turizm Otom, a company located in Turkey; ECB Kuyumculuk Ic Vedis Sanayi Ticaret Limited Sirketi, a company located in Turkey; Gunes General Trading LLC; and others.  As a result of this scheme, the co-conspirators induced U.S. banks to unknowingly process international financial transactions in violation of the IEEPA.

Both Giuliani’s lawfirm, Greenberg Traurig, and Mr. Mukasey’s firm, Debevoise & Plimpton, are understood to have represented eight banks between them that were victims of Zarrab’s alleged violations.

It is unclear whether they still represent these banks.

Greenberg Traurig is also a registered agent for Turkey.

In their report, Reuters wrote:

Giuliani and Mukasey will not appear in court or help prepare for Zarrab’s trial, Benjamin Brafman, another of Zarrab’s lawyers, said at the hearing. Instead, he said, they are seeking a “diplomatic solution” to the case.

The two men traveled to Turkey shortly after Feb. 24 to meet with Turkish President Recep Tayyip Erdoğan. Giuliani, an ally of President Donald Trump, discussed the trip in advance with then-U.S. Attorney Preet Bharara, who brought the charges against Zarrab, Brafman said, while Mukasey conferred with Attorney General Jeff Sessions.

“No one was trying to hide their involvement,” Brafman said.

At one stage in response to questions about high fliers Giuliani and Mukasey, Brafman told the court it “quite frankly is none of the Government’s business.”

Judge Berman disagreed, saying it was “unquestionably the business of the court.”

GIULIANI GOES TO TURKEY TO TALK TO ERDOGAN DIRECT

Both Rudy Giuliani and Michael Mukasey flew to Turkey to talk in person with President Erdoğan about the Zarrab court case.

The court was advised of potential conflicts of interest, but Judge Richard M. Berman of the Federal District Court in Manhattan:

… volunteered that he was advising the government and the defense that he himself had had “prior relationships” with the two lawyers. He said that he served on Mr. Giuliani’s mayoral transition team in 1993, and that he was appointed in 1995 as a family court judge by Mayor Giuliani. He noted that he had also once served as a colleague on the federal bench with Mr. Mukasey, who had been a judge in Manhattan [but] … said he did not believe that those prior relationships would affect his “ability to continue to be fair and impartial”.

On September 25th last year, the Hurriyet Daily News reported that President Erdogan had raised the Zarrab matter with then U.S. Vice-President Joe Biden whilst both were in New York for a UN Assembly:

“Both prosecutor [Preet] Bharara and judge Richard Berman are names who had previously been hosted by FETÖ [the Fethullahist Terror Organization] in Turkey. In other words, the U.S. Department of Justice handed Zarrab over to names which FETÖ had wined and dined. I told this to Biden. He said, ‘I did not know that much.’ They are after other things through relationship networks, not through the law.

The president also added there were “malicious intentions” in the Zarrab case, as his name had been listed in the indictment.

“It is interesting that the indictment reads my wife [Emine Erdoğan] was the founder of TOGEM [the Social Development Center] and I had a relationship with that association. However, neither my wife nor I are among the founders of that association. The fact that this is mentioned shows the direction of those men’s malicious intent, as there is no such [association]. As my Foreign Ministry undersecretary expressed well, there is an article called sovereign immunity in the U.S. judicial system.”

It is interesting that Erdoğan has checked out the fact that he cannot be called to the U.S. because of “sovereign immunity”.

Check out these tweets and the graph posted by respected Turkish journalist Abdullar Bozkurt, chief of Today’s Zaman Ankara Bureau. They show that despite protestations, for some time the Erdoğans have had a relationship with Zarrab and, like so many others in this tale of hydra-headed intrigue, political and financial connections as well.

(Emine Erdoğan is on the left wearing the zebra-patterned headscarf and Reza Zarrab is the bearded man on the right.)

In today’s published interview by his propagandists, #Erdogan denies any link to TOGEMDER, says his wife has also nothing to do with it. pic.twitter.com/z5XiIBjo8N

#Turkey president now maintains he has the immunity from prosecution in the US because he is the head of a state.

US-indicted #Zarrab‘s web of links to #Turkey president #Erdogan, his family and associates through a front charity organization. pic.twitter.com/IiEBjQbYim

Like his murderous neighbours and fellow despots Syria’s Bashar al-Assad and Da’ash (Islamic State), Erdoğan claims a divine right to rule — a supposition shared at times by some of our own delusional politicians, even if in more diluted form.

Erodogan’s Justice and Development Party’s (AKP) sleight referendum win, if allowed to stand, will surely see him give full vent to his increasingly histrionic paranoia and megalomania.