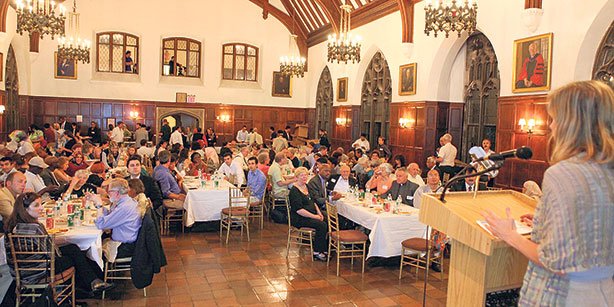 The iftar event in Columbia University, was attended by numerous prominent members of the community.(Photo: AP)

An iftar was held in Columbia University, bringing together numerous prominent members of the community.

Sarah Sayeed, director of the New York Interfaith Dialog Center, hosted the program that started with breaking of the fast as the adhan (call to prayer) was heard. School of engineering Dean Dr. Mary Boyce, expressing their honor to be hosting the iftar, said: “We have hosted many different events in this auditorium, but this event is very different from the others. We are very happy to host and know you.”

Karenna Gore, one of the organizers of the iftar, said she had fasted for the first time in her life, adding she wanted to share the feelings of Muslims who are fasting.

Among the attendees were New York State Assembly Member from Manhattan Richard N. Gottfried, Burton L. Visotzky, a professor of Midrash and Interreligious Studies at the Jewish Theological Seminary and several other American academics, as well as members of non-governmental organizations and diplomats from the United Nations.

Adile Osmanoğlu, a grandchild of Abdülhamid II, one of the last Ottoman sultans, also attended the event.

“Ignorance, fear, hatred, and lies beyond reality” seems to be a common pattern of many accusations in our world. The pattern well explains the motif of the statement, “Fethullah Gülen infiltrates the United States through our charter schools.” It seems to me that the only truth of the statement is that it aims to disturb […]