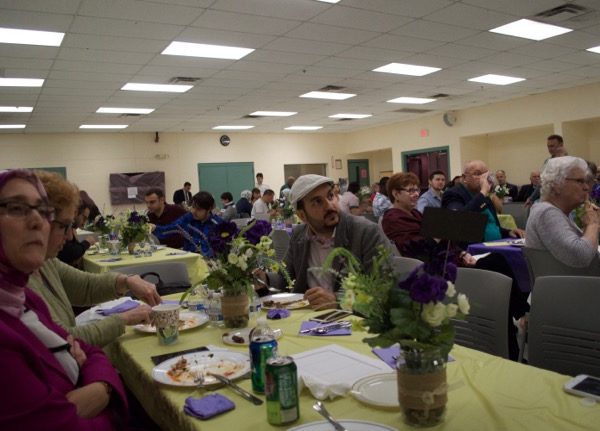 The practice of fasting in religions other than Islam was explored June 17 during a Ramadan Iftar held at the township Community/Senior Center in the Municipal Complex.

An Iftar is the breaking of the daily fast during the Muslim’s month-long observance of Ramadan.

Speakers representing Judaism and Christianity spoke about fasting in their faith traditions during the event, which was sponsored by the Hasbrouck Heights-based Peace Islands Institute.

Anna West Zott, cantor of Anshe Emeth Memorial Temple in New Brunswick, told the roughly 100 attendees that Judaism observes six “statutory” fasting periods, which are used “as a means of purification and atonement, with the goal of leading Jews to more ethical behavior.”

Fasting in general, she said, “is an opportunity to cleanse ourselves, to purge ourselves of impure or unethical thoughts, then we can return to regular life ready to take it on anew.”

The Rev. Hartmut Kramer-Mills, of the First Reformed Church in New Brunswick, told attendees that his denomination, Reformed Protestantism, does not have a tradition of fasting, “but some of us do fast anyway.”

Kramer-Mills said that rather than engage in fasting, Reformed Protestanism’s founder, John Calvin, developed other means of “restraining ourselves.”

“Sometimes the opposition against fasting and other practices of the established Church became rather rebellious,” he said.

The earliest example came in the 16th Century, he said, when scholars rejected the Biblical translations of the Catholic Church and created their own. This resulted in a ban on creating “idols” of any kind, including religious statues, he said.

Later, Calvin banned the wearing of jewelry in Geneva, Switzerland, a move that eventually led to teh development of the watch industry there. (Watches were seen by Calvin as utilitarian, Kramer-Mills said.)

Also speaking was Samy Gur, a filmmaker, who read from “It’s Ramadan, Curious George,” a version of the traditional children’s character that looks at the Muslim observance.

Gur also said that people who perpetrate hate crimes should be called terrorists, and that good can overcome evil.

“The fact the mayor is here, the Board of Education (president) is here, and so many common township residents are here is a testament to the fact that evil, sooner or later, is overcome,” he said.

Yesim Acike, of the Central Jersey chapter of the Peace Islands Institute, said that the organization hopes that events such as the Iftar will “help us overcome the challenges that we face. Building bridges and talking to people who are not just like us, who are slightly different … events like this are seeking to find common ground.”

Speaking of the two men killed recently in Portland, Ore. while defending a Muslim woman, Acike said, “They are an inspiration for us to stand up against bigotry and hatred, no matter where it comes from.”

Kramer said that he agreed with Acike that everyone faces challenges.

“Your community in particular is challenged,” he said. “Recently a mosque in town stood up to meet that challenge through the simple gesture of becoming a polling place. I just thought that was absolutely brilliant.”

Potosnak talked about the importance of education in bridging gaps among cultures.

“When you live in a place that’s so diverse, it’s important to not only recognize, but understand, through education and opportunities like this, for cross-cultural, cross-ethnicity and cross-religion” understanding, he said.

Turkish and Australian perspectives on multiculturalism and diversity differ according to experts talked at a workshop on Tuesday in Akçakoca. Discussing at the second day of the first Australia-Turkey Dialogue Workshop organized by the Abant Platform, participants agreed that multiculturalism was embraced by Australia far before it even began to be discussed in Turkey.