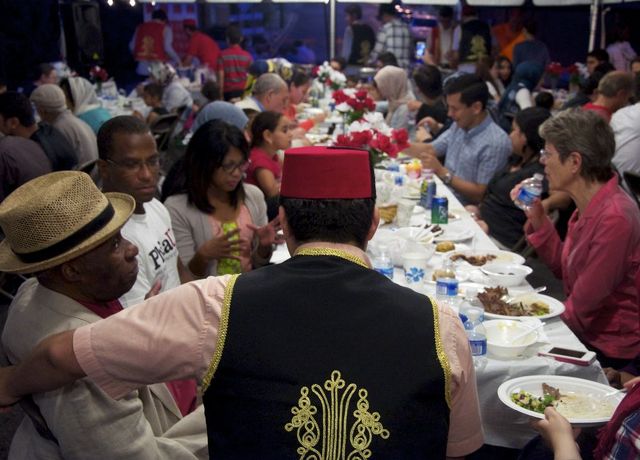 The Muslim holy month of Ramadan is known throughout the world as a period of fasting, but equally important to the month’s cultural history are the street celebrations where adherents come together each night to break their daily fast.

State College got a small taste of this celebratory aspect of Ramadan – and a big taste of Turkish food, art and culture – at a public Ramadan dinner celebration held downtown on Saturday evening.

Samet Akcay, a volunteer with the Turkish Cultural Center of PA, says it’s “impossible to just cut and paste” the energy and atmosphere of Ramadan celebrations to State College. Elsewhere in the world, including Akcay’s native home of Turkey, each night of Ramadan sees people come together in the streets to eat and celebrate together in large numbers, giving the holy month a festive atmosphere.

Though Saturday’s event was only a sampling of the rich traditions associated with Ramadan, Akcay says “having that small taste is very important.”

Ugur Pakoz, a Penn State graduate student in petroleum engineering from Turkey, says he’s had few chances to meet other people of Turkish heritage in State College since he moved here eight months ago. He says the event reminded him of his home – where time with loved ones, especially during meals or important periods like Ramadan, is deeply cherished.

“Most people here in America don’t often have the chance to have these experiences,” Pakoz says of the multicultural event. “Things like this are very important so people can understand the different cultures around them.”

Turkish artist Gülay Baltali shared with visitors her collection of erbu paintings, a traditional Turkish art form dating back to the 15th century. Erbu, also known as marbling art, involves painting onto a layer of water that is then carefully transferred onto paper, fabric or canvas. Baltali says the technique is still taught in a very traditional way. Students are required to train under a master for years before being allowed to make their own independent work.

Baltali says she’s received a strong and positive response to her vibrantly colored paintings. While she’s taught classes and displayed her work in larger cities, she says State College is a smaller community that still appreciates art from all different cultures.

Omer Dogru, a Penn State alumnus, says that misunderstandings about Islam still exist in America, but public events like Saturday’s dinner help people learn more about a culture they don’t always have the chance to engage with.

“Tonight really has a warm family atmosphere,” he says. “It’s like all these people have come away from their homes to make a home here.”