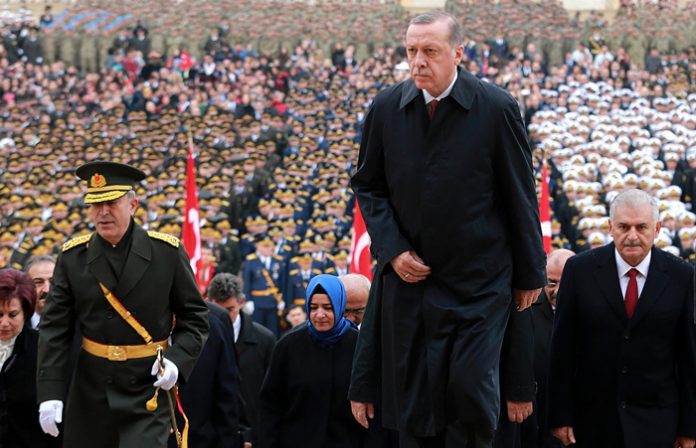 Michael Rubin of the American Enterprise Institute just gave us a pat on the back confirming our original assessment of July 2016 that Erdogan had staged the July 2016 coup. You may recall what our July 2016 New English Review article: “Erdogan’s Faux Coup“.

We wrote at the time:

When first televised pictures burst out on July 15, 2015 on international media about an alleged coup by the Turkish Army they were peculiar. The soldiers stationed at airports, in tanks on the Bosporus Bridges looked timid and frankly lost. The flyovers and explosions by low flying Turkish Air Force jets and attack helicopters may have been threatening, but in reality they were for show. August 1st was the date for appointments to Turkey’s Supreme Military Command. What better time to unleash a long planned staged coup that unfolded on flickering TV screens across the globe. Normally, in the four prior coups by Turkish military, the President and cabinet were immediately sequestered, official media communications were seized and the reigning government toppled before Turkish citizens knew what had occurred. Not this time. Erdogan was ensconced on vacation in his resort palace in Mamaris, while military units were seizing news offices, rolling out tanks on Bosporus bridges and soldiers were blocking entrances to Istanbul International Airport. Then, as if on cue, hordes of men jammed the streets in Istanbul and Ankara. This was triggered by an Facetime video message from Erdogan that he was returning to Istanbul in his Gulfstream 5 executive aircraft. He declared that he was seizing back control and summarily ordered the arrest of members of the country’s judiciary, officers in the country’s military and then Erdogan supporters began conducting summary executions. It is alleged that the country’s military intelligence, the MIT, had fomented the “coup,” which may have a partial ring of truth, as they had executed previous false flag operations at the behest of Erdogan.

Erdogan wants to clean out all remaining opposition so that he assumes dictatorial Presidential powers equivalent to a Sunni Islamist Caliph. The paranoia has swelled so badly that a senior Turkish official accused the US of being involved in the coup. That allegedly brought a rebuke from Secretary Kerry. Erdogan’s bullying is nothing but persistent. This time even the waning Obama Administration that had previously considered him the “good Islamist” is sitting up and taking notice of how volatile and dangerous he is. Erdogan is using the playbook of the late Saddam Hussein in Iraq; reminiscent of Stalin’s purge of the 1930’s mired in paranoia. Moreover, there were precursors that this staged coup might be Erodgan’s Sunni extremist equivalent of the 1979 Islamic Revolution in Iran. Way past time that this country and others in the Atlantic alliance seriously consider requesting that Turkey be removed as a NATO member, but then he might even opt to join a mutual defense pact with Putin.

Chaos arising from this alleged failed coup in Turkey makes it an unreliable dangerous member of NATO and an even less than cooperative member of the US led coalition fighting ISIS in Syria. The Kurds end up as the only reliable and effective boots on the ground in both Syria and Iraq fighting the Islamic State. At the same time the coup was occurring and being crushed there was an air drop of the long awaited weaponry from the US led coalition resupplying the Kurdish led Syrian Democratic Forces. Now, they are free to finally close the Manbij gap along the Turkish frontier that provided unhindered access by the Islamic State.

Inside Turkey, Erdogan controls both the judiciary and the media and so has been able to push a single narrative in support of his accusations. The problem with the official Turkish narrative, however, is that it omits many contradictory strands of information. Diplomatically, this is reflected in the frustration Turkish officials have voiced at the failure of the United States and several European states to support a crackdown on Gülen’s followers. Simply put, the evidence Erdogan has supplied does not reach a standard of evidence necessary for action in any independent court.

So, if Erdogan’s narrative is flawed, what are the alternative theories? On the surface, much doesn’t add up. Now, several career Turkish military officers — none of whom are followers or supporters of Gülen — have compiled from open sources a lengthy report analyzing the coup. They have authorized me to share the Dropbox link where they have made it accessible. They describe their own efforts:

This study is a modest effort for a better understanding 15 July 2016. It addresses some of the critical areas like who the dissenters were, their motivation, Erdogan’s prior awareness, his role in the events, his supporters in the military and elsewhere. This study is based on the collection and the analysis of the publicly available data. It comprises records of official/public speeches, press releases/reports, witness/suspect testimonies, and indictments. The study puts a light on the background of 15 July, reconstructs the critical events on a timeline, raises arguments and offers a series of findings.

The whole report is worth reading. It is based entirely on open sources, and highlights the internal contradictions and provable falsehoods offered in testimony, both voluntary and forced. They make a persuasive case that Erdogan’s narrative is false and that the coup was essentially Turkey’s equivalent of the Reichstag fire. Some followers of Gülen participated, but they were largely lower ranking officers who either believed that they were engaged in an exercise ordered by their immediate military supervisors, or made the wrong choice when faced with a decision about which side to support as events unfolded.

They make a persuasive case that Erdogan’s narrative is false and that the coup was essentially Turkey’s equivalent of the Reichstag fire.

The Turkish military officers’ report especially important as Turkey prepares to try tens of thousands of civil servants and officers on charges that could lead to life in prison or perhaps even the death penalty.

Turkey may be a dictatorship and its judiciary a joke, but that doesn’t mean that both Turks and the outside world shouldn’t recognize the story is more complicated. No matter how authoritarian Turkey may become, it is hard to completely hide the truth.

The government of Turkish President Recep Tayyip Erdoğan is falsely accusing anybody that opposes it of treason, a prominent Turkish journalist currently detained in an Istanbul prison