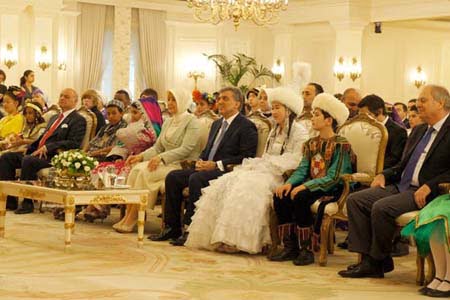 The president has branded the annual contest of foreign students on the Turkish language the “greatest service” to Turkey, Turkish culture and its language, as he met with contestants participating in this year’s Olympiads.

President Abdullah Gül told reporters while meeting with participants of the 11th Turkish Olympiads in the Çankaya presidential palace that organizations such as the Turkish Olympiads contribute to peace, brotherhood and friendship.

In the colorful event, the students recited Turkish poems and sang songs to entertain the participants. Azerbaijan’s Demir Demirov, Malawi’s Ahmet Tuavi and Tunisia’s Umran Zayed performed for the president and first lady, while a group of students from Kyrgyzstan performed a Black Sea folk dance, meeting with lengthy applause.

He congratulated everyone who made efforts to make this organization happen. He said considering that the organization received no state funding and that it was done as a result of a civil initiative, it deserves plaudits.

Gül said Turkish people can see in Turkey how efforts of Turks abroad yield positive results, but he can observe these on the ground.

“I visit Turkish schools during my visits from Asia to Africa, from the US to Japan. I see that along with your own culture, you also learn Turkish and universal culture. Gül told the students that they will have a role in the future to deepen relations of their own countries with Turkey and will contribute to expanding cooperation between Turkey and their nations.

Please, take a deep breath and take a trip back to a short time ago. What do you remember of the “Justice and Development Party (AK Party)-Gülen movement disagreement”? Here’s a brief reminder, for a better understanding of the discussion: Fethullah Gülen was taken to the hospital in an ambulance because of an emergency. Because I visited him that day, I wrote as follows: “One of the persons who made [the] first phone call was Prime Minister Recep Tayyip Erdoğan.