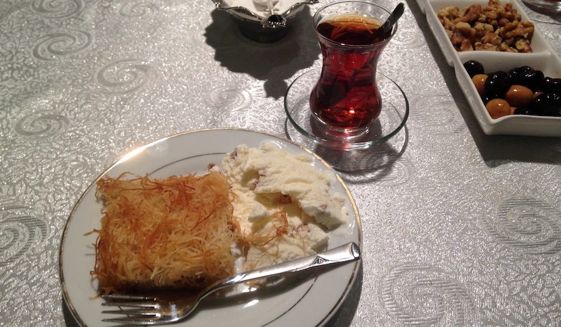 Turkish kadayif, a pastry dish similar to baklava, is offered as the dessert course of a traditional Muslim iftar, a fast-breaking meal served after sundown during the holy month of Ramadan, alongside cay, a tea drink. (By Emily Leslie/The Washington Times)

Conversation flowed between Muslim and non-Muslim guests alike. Selma, Mr. Aksoy’s wife and mother of three, presented lentil soup and bread to each guest at the iftar, or the “break fast” meal Muslims eat after sunset during Ramadan.

As president of Rumi Forum, the organization that planned the iftar, Mr. Celik’s goal is to encourage intercultural dialogue and peace in the world through cultural events.

“In a post 9/11 America, Muslims have felt a little isolated,” he said. “Our programs of bringing members of the D.C. community into Turkish-American homes helps overcome the possible ignorance that may exist through engagement and dialogue. And sharing a meal is a great venue for this.”

Christianity, Islam and Judaism are united by a common origin through Abraham, Mr. Celik pointed out, fostering a peaceful coexistence among different religions.

“It is said that Abraham never sat for a meal on his own. If he was alone, he would not eat,” he said.

“It is a blessing to have guests, in particular at Ramadan,” he said. “We are told by Prophet Muhammad that a guest brings with them 10 blessings and leaves with only one; nine have been left for the family.”

“[Iftars are] a form of culinary diplomacy,” a fellow iftar guest said of the host family’s gracious welcoming.

Mr. Aksoy’s mother, a Turkish native who speaks little English, presented her homemade sarma, or stuffed cabbage rolls, and dolma rolls with rice, mint and parsley stuffed inside grape leaves. The “buyukanne,” or grandmother, brought them straight from Turkey’s capital herself.

“I’m still learning how to make those,” Mrs. Aksoy said with a laugh in appreciation of her mother-in-law’s culinary expertise.

Mrs. Aksoy then offered her incredible main course of Turkish kofti, a meatball and fried potato meal, and beyti, a sliced tortilla rolled over ground meat and onion, and watermelon slices.

“In Ramadan, we always share dinner,” Mr. Aksoy said of opening his home to guests, who are sometimes complete strangers. “Food is very important because God gave us food. He gave everything.”

All the while, three young Aksoy children ran about the home. The eldest, an 8-year-old boy, clung to his games as most boys his age do. The daughter, who just finished kindergarten, bashfully hid behind her mother. The youngest, a 22-month-old girl, spoke a mix of Turkish and gibberish that even her parents could not decipher.

The family has lived in the United States for 10 years but holds true to its roots in Turkey’s capital, Ankara.

The cultural differences between American and Turkish women became prevalent when the grandmother was informed that one of her guests was a young, single woman.

“Now is the time [to get married],” she exclaimed in a light, friendly manner. Turkish families are generally traditional and patriarchal, with women as proud homemakers and rearers of children.

Turkish kadayif, a pastry dish similar to baklava, was offered for dessert. Mr. and Mrs. Askoy acknowledged with a laugh that they bought the treat from the frozen section at Safeway.

With the final course, it is tradition to drink cay, a Turkish tea served in a tulip-shaped glass. Contrary to popular belief, Turkey is the homeland of the tulip, the family said.

“The Dutch commercialized the tulip, but really it’s from Turkey,” Mr. Celik said in defense of Turkey’s beautiful tulip fields.

As family and guests gathered at the table for kadayif and cay, Mr. Askoy expounded on the meaning of Ramadan.

“It’s not just eating. We have to give up all bad things and be perfect people,” he said. “We should be friendly, give to the poor and pray.”

Anyone interesting in registering for an iftar should send an email to [email protected] To learn more about Rumi Forum, visit RumiForum.org. “Our goal in interfaith dialogue is to establish solidarity among members of major world faiths by nurturing empathetic acceptance and mutual respect,” said Rumi Forum’s honorary president, Fethullah Gulen.

“By standing together as members of diverse faiths, we would like to establish a breakwater against waves of misguided, suspicious people who yearn for a clash of civilizations.”