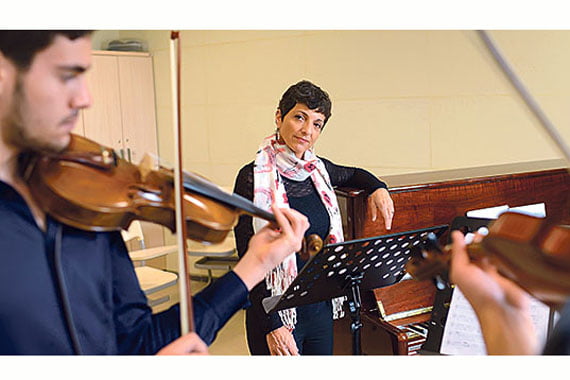 Lebanese-American singer Julie Slim poses for a photograph before her performance at İstanbul’s Fatih University on Monday. (Photo: Ali Şimşek)

…there are a few exceptional people who can really make a song a living being by becoming one with it, as music is an irreplaceable part of their lives. Lebanese-American singer-songwriter Julie Slim, who visited İstanbul this week and performed Turkish songs in the city, is one of those people.

Having grown up in a Beirut home listening to Lebanese diva Fairuz, who is called “ambassador to the stars,” and the beautiful voice of her mother singing in French and English, Slim started to pursue her love of music in real terms after she started out in musical theater at college in the US. As the years passed, the singer’s love of music grew deeper and deeper, leading her to sing in multiple languages, including Arabic, Turkish, Armenian and Greek, as well as performing with the ensembles Layalina, Austin Global Orchestra and founding her own band, Rendez Vous.

As an example of her devotion to music, the singer admitted that she endured not speaking or singing for a month last summer after undergoing throat surgery, as she wanted to return to singing that much.

“Music has a language of its own. If you are listening to each other [while performing music], you can have conversations that create musical ecstasy and the highest level of musical achievement,” the singer explained.

Slim’s faith in the communicative power of music helped her revisit her roots when she decided to sing in her mother tongue, Arabic, nearly four years ago. Describing singing in her mother tongue as something magical that makes her feel at home, the singer stated that she began to perform in Arabic after she started singing in the University of Texas’s Middle Eastern ensemble, Bereket.

It was also thanks to her performance in Bereket that she began to sing in Turkish. Her repertoire of Turkish songs includes “Izdırap” (Misery) and “Biz Dünyaya Ekmeye Geldik” (We Came to the World to Do Good Deeds,” both of which were written by Turkish Islamic scholar Fethullah Gülen and composed by Azerbaijani composer Ziraddin Taghiyev.

Explaining why she chose to sing these two poems by Gülen instead of some others, Slim felt it was the poems that selected her. “If you cannot feel misery, you cannot feel happiness. … If you are miserable and see the other’s misery, your misery is lessened and you can help the others. ‘Izdırap’ is poetic. … [When I sing the song I feel] sadness, anguish,” Slim stated.

“Biz Dünyaya Ekmeye Geldik,” is more of an inspiring song about dreaming, making your dreams happen and giving yourself to God, according to Slim. “[When I perform this song], I feel like I am calling people to come with me, to live the fullest that you can… [the song says] we are meant to do something here, and let’s do it together,” the singer elaborated.