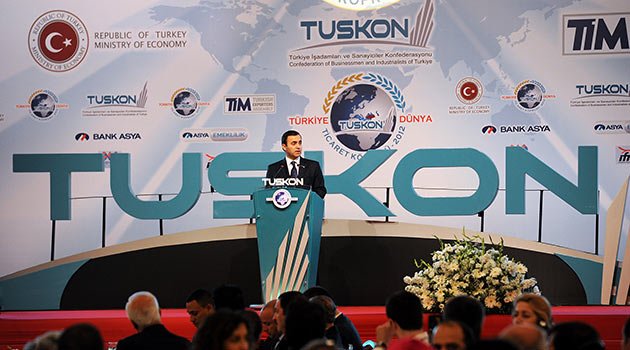 The Turkish Confederation of Businessmen and Industrialists (TUSKON) plays a critical role in cementing investment and trade ties between Turkey and Russia and is a key partner for its Russian counterparts, the head of a top Moscow-based business group said on Wednesday.

The chairman of the Chamber of Commerce and Industry of the Russian Federation (RF CCI), Sergei Katyrin, told the Cihan news agency that the group places great importance on cooperation with leading Turkish counterparts such as TUSKON to boost mutual projects between Russia and Turkey.

Katyrin said Turkish investors are keen to diversify investment in the Russian market and that talks are under way with various Turkish companies for upcoming investment projects in Russia. Turkish businesses in Russia often undertake construction projects, and many have chosen the capital city, Moscow, as a hub. In recent years, however, Turkish entrepreneurs from a number of sectors including furniture, food and energy have also entered the Russian market. These companies are not always investing in Moscow alone, as other relatively less-developed regions of Russia have lured them with incentives by the local authorities.

One of the regions where Turkish investment is likely to come is the Alabuga Special Economic Zone, the largest special economic zone focusing on industry in Russia. A large delegation of Russian investors from the RF CCI, headed by Katyrin, was invited to Turkey in March by TUSKON where they proposed investment opportunities in some Russian regions to Turkish companies. “We had some fruitful talks with our Turkish friends in March, and this should pave the way to attract investment to special investment zones such as the Alabuga Special Economic Zone,” Katyrin said.

Last year, the Turkish and Russian governments agreed on a roadmap to boost mutual trade to $100 billion annually in the coming years. Katyrin said that both sides need to focus on concrete projects that will yield high productivity and profits in the medium term.

“Further cooperation and joint projects with TUSKON will help us on this path,” he concluded.

Russia is one of Turkey’s main trading partners and mutual trade between the two countries is expected to exceed $35 billion in 2014. The balance of trade, however, still favors Moscow since it is the largest supplier of natural gas to Ankara.