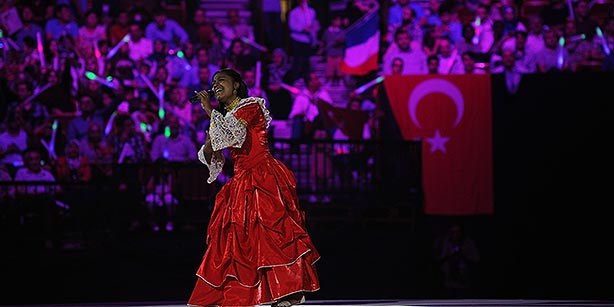 Hundreds of children from a variety of countries across the world performed a spectacular show in Brussels on Saturday night. (Photo: Today's Zaman)

Children from around the world who participated in the 13th International Festival of Language and Culture (IFLC) put on a spectacular show in Brussels on Saturday night, drawing a large number of guests.

Featuring 350 children from a variety of countries, the IFLC’s “Colors of the World” show in Brussels was broadcast live by Belgium’s state station RTBF and La Trois TV station on Saturday, along with Samanyolu TV, Irmak TV, Mehtap TV and Europe MC. To support the show, #ColorsoftheWorld and #IFLCBrussels hashtags were created on Twitter during the live broadcast.

The children, who were welcomed in Brussels and performed a special show at the European Parliament at the behest of the body’s president, Martin Schulz, on Wednesday, sang songs in various languages, including Kurdish and Turkish.

Earlier in the day, Belgian Prime Minister Charles Michel posted a series of tweets in which he expressed his country’s pride at hosting the event. “Belgium is proud to host the Festival of Language and Culture,” Michel said in one of his tweets.

He also thanked all those who took part in the organization of the event on behalf of the Belgian government.

Many of the attendees shared their reactions to the grand international production. “This is an unbelievable project. To offer students from different countries from around the world this opportunity is very admirable,” stated Belgian Socialist Party President Fouad Ahidar.

Mayor of the city of Kasterlee, Ward Kennes, was also present and said: “For students to come from different countries throughout the world to the capital of Europe, to the diverse city of Brussels is wonderful. I am very happy to witness this.”

“This production is wild; to be able to bring so much talent from so many different countries and have them [the students] come together like this is unbelievable. I could put them all in films!” said Belgian director and attendee Adil El Arbi.

The IFLC — a new name for what used to be known as the International Turkish Language Olympiads — has already been held in capital cities around the world for two years since the-then prime minister and current Turkish President Recep Tayyip Erdoğan banned the festival in Turkey after a corruption investigation implicating members of the government and businessmen close to it went public on Dec. 17, 2013.

Erdoğan, without presenting any concrete evidence, accuses sympathizers of the faith-based Gülen movement — popularly known as the Hizmet movement — especially those in the police forces and the judiciary, of being behind the graft probe, in what he calls an attempt to overthrow the government. The accusations are strongly rejected by the movement.

Since then, instead of helping the police and judiciary continue the case, Erdoğan has chosen to target anyone associated with the movement, including Turkish schools based abroad, which are the main contributors to the IFLC.