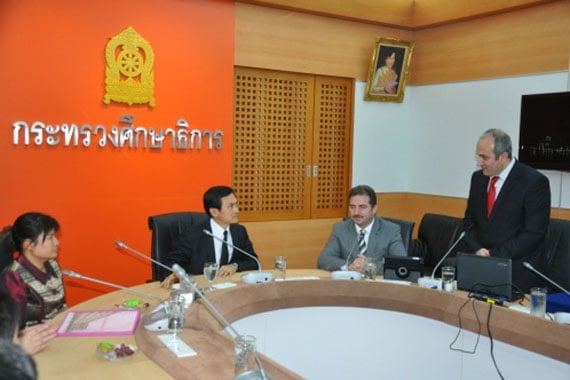 The Turkish-operated Chindamanee, Siriwat, Wichai, Pan-Asia Schools in Thailand continue to wave the flag for Thailand in international arena. The schools’ students having ranked high in the recent international contests paid a visit to the Thai Minister of Education, Chaturon Chaisaeng, in his office. The students told the minister about the event following a promo display of International Language and Culture Fest.

The minister Chaisaeng, in his statements to Cihan News Agency, said, “What I see before me is amazing. Seeing the medals in these students’ hands, it is obvious how successful the schools under Marmara Educational Institutions. They have the opportunity to represents both Thailand and Turkey abroad. Apparently, they showed their best representing Thailand in last year’s International Language and Culture Fest in Turkey. Ministries should back such events.” Chaisaeng further said he would be glad to have more Turkish schools in his country.

General-manager of the umbrella Marmara Educational Institutions’, Ufuk Civelek, briefed the minister on the innovations they are going to execute at the schools. Civelek also presented a hand-crafted tile plate to the minister and invited him to 2014 International Language and Culture Fest.

Following the visit, the schools’ vice-general manager, Omer Faruk Karacam reported that they informed the minister on the achievements of the four schools in Thailand.

The Turkish schools have been honored several times to date with King’s Award, Thailand’s most prestigious honor, for their outstanding achievements.