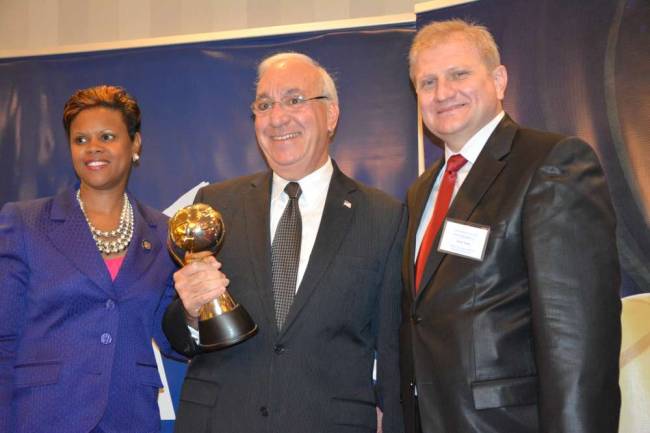 Clifton Major James Anzaldi, center, was the recipient of Peace Island Institute's annual Diversity Award, which he received during a gala event in Morristown on May 31. Pictured with Anzaldi is, left, Assemblywoman Shavonda Sumter and Ercan Tozan, the executive director of PII's New Jersey chapter.

Proudly declaring that Clifton is a friendly municipality composed of a population that speaks 81 different languages, Mayor James Anzaldi accepted the Diversity Award from Peace Islands Institute (PII) on May 31, during the organization’s eighth annual awards ceremony held at the Hyatt Hotel in Morristown.

“Clifton has been my lifelong home,” Anzaldi said in accepting the award. “I think it’s the best place in the world. Clifton has become a very diverse community, especially during the last 25 years, with people from different cultures and different parts of the world. We’re very proud that we’ve embraced diversity. On behalf of all the people of Clifton, I accept this award. It’s the people of Clifton that made it possible. God bless America, and let’s always remember our men and women in the armed services that protect us and make our freedom possible.”

Last November Anzaldi was re-elected as Clifton’s mayor, topping a field of 15 candidates with 8,245 votes. Anzaldi, a product of the Clifton’s public school system, was first elected to the city council in 1978. After serving on the Council for 12 years, he succeeded two-term Mayor Gloria Kolodziej in 1990 and has been the mayor of Clifton ever since. In addition, he has served as president of the New Jersey League of Municipalities (NJLM), the association that represents New Jersey’s 566 municipal governments, and is a longtime member of the Clifton Boys and Girls Club’s board of trustees.

Joining Anzaldi as a guest at the event was Joseph Cupoli, who was appointed to Clifton’s City Council earlier this year to fill the seat of Matthew Grabowski, who died of cancer. Cupoli is a local Republican leader and a candidate for county freeholder.

Other notables honored at the May 31 gathering included former N.J. Gov. James Florio, who received the PII Community Service Award; David Hespe, N.J. commissioner of education, who accepted the Education Award; Richard Thigpen, vice president of PSEG, Newark, who garnered the Business Award; and Hidayet Karaca, the president of Samanyolu Broadcasting Group of Turkey, who was the recipient of the Media Award. Karaca was unable to attend the event as he has been imprisoned in Turkey for more than 100 days, due to an ongoing media crackdown by the Turkish government. A symbolic “empty chair” was placed on stage during the presentation of the award to Karaca.

Last year Sheriff Richard Berdnik, a 1978 graduate of Clifton High School, was the recipient of PII’s Community Service Award. Berdnik was a member of Clifton’s police department for more than 25 years and is currently serving his second term as Passaic County sheriff.

PII is a non-profit organization with members and affiliated organizations and businesses in Clifton. Ercan Tozan is the executive director of PII’s New Jersey chapter. According to its mission statement, PII (www.peaceislands.org), as part of the international Hizmet movement, promotes tolerance, education, friendship and harmony. It looks to create “islands of peace” in a diverse society. In order to fulfill this mission, PPI organizes activities such as trips to Turkey, lectures, seminars, conferences, luncheons, dinners and programs for students.

The New Jersey chapter of PII is located in Hasbrouck Heights; PII’s headquarters is in New York City.