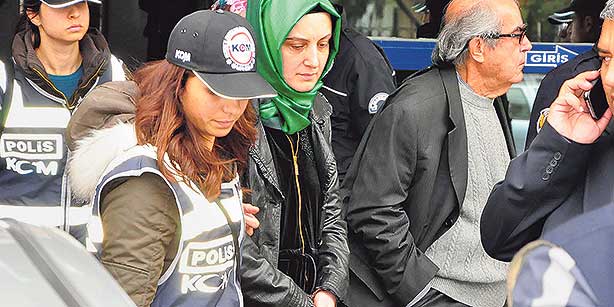 Police escort detained people prior to taking them to the hospital for a medical check, along with 26 others, as part of a probe in Manisa. (Photo: DHA)

Turkey is not a full-fledged dictatorship. Its civil society is perhaps the most vibrant it has ever been. It holds free, albeit not fair, elections regularly and citizens have a chance to change their governments peacefully.

But Turkey is a hell for people inspired by teachings of cleric Fethullah Gulen, who is residing in rural Pennsylvania. Gulen, who is regarded as a leading moderate voice of Islam, is branded a terrorist in his hometown. Anyone praising him or donating to a charity group affiliated with him could face a jail sentence for “spreading terror propaganda” or “financing a terrorist organization.”

Only in the past month, the Turkish authorities have seized two newspapers, two TV channels and a radio channel critical of the government. The media outlets had an editorial line sympathetic to Gulen. Two days ago, another 17 channels founded by businessmen close to Gulen were taken out of a public satellite, effectively finalizing the complete blackout of the Turkish media. Editors and reporters were seen weeping as they shut down their 22-year-old broadcasts. On Wednesday, Kaynak Holding, Turkey’s largest publishing house with over 8,000 employees, were confiscated by the Turkish authorities. It was, again, founded by businessmen close to Gulen.

The crackdown is not only limited to the media. Earlier this year, Bank Asya, following a lengthy campaign to sink it, was seized by Turkish authorities over fabricated grounds. The bank was founded by businessmen close to Gulen. Even housewives who deposited their money to the bank to boost its savings were arrested for “financing a terrorist organization.” The country’s arresting machine spares no one.

Nearly 50,000 entrepreneurs who sympathize with the Gulen movement to varying degrees are subject to intense government scrutiny, slapped with hefty fines over petty excuses and even forced to flee the country — with their investments. Last month, Turkish authorities took over 22 companies of Akin Ipek, a Turkish business tycoon, because of his sympathy to Gulen. The court’s reasoning to take over the companies was astonishing: “The records of the companies are too perfect to be true in Turkish standards.” Another businessman, Memduh Boydak, was briefly detained in the summer after he posted tweets praising the Gulen movement.

The government is now preparing to shut down more than a dozen universitiesfounded by the Gulen movement along with hundreds of other private schools. Thankfully, a law that would close thousands of prep schools, facilities that teach English and Math to impoverished Kurdish boys and girls in conflict-ridden Southeast, were struck down by the country’s Constitutional Court. Last year, the government banned Kimse Yok Mu, largest Turkish charity, from fundraising because it is linked to the movement.

The Turkish government has escalated cracking down on anyone criticizing the president. But the clampdown on the Gulen movement and its affiliates have been in profound proportions. Because the movement has heavily invested in the media, it has a much louder voice than its current clout. Its dominance in the media creates an illusion that the Gulen movement is still very strong in the country and continue wrestling with the government. It is no surprise that many Western editorials dubbed the ongoing developments in Turkey as a “power struggle.”

A part of the reason why secular critics hesitate in throwing their weight behind the movement is the support Gulen lent during purge trials of the country’s military officers. The trials, plagued with rampant irregularities and smear campaign, accelerated after a constitutional referendum in 2010, when the military’s role in politics was restricted and the hostile judiciary was buried.

The Gulen movement should not be blamed for extending support to purge trials, but ignoring irregularities and being indifferent to mistakes that diluted the entire process.

The Gulen movement should not be also blamed for backing the removal of the so-called “deep state”, but for not pushing to install essential institutional accountability mechanisms that would put elected governments under check.

As a result, there was a large segment of the society disillusioned with the trials and a government checked by almost no functioning institution. The price to pay is now enormous. 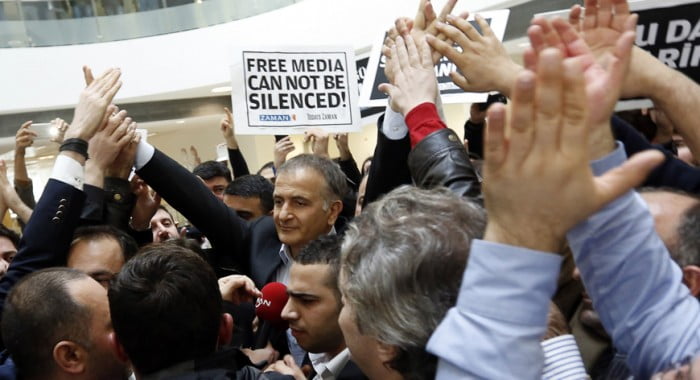 Zaman editor-in-chief Ekrem Dumanli (C), escorted by plainclothes police officers, is cheered by his colleagues as he leaves the headquarters of Zaman daily newspaper in Istanbul, Dec. 14, 2014. (photo by REUTERS/Murad Sezer)

For almost two years, the Gulen movement had tried to forge alliances with other critics of the government, with no substantial results. It is mostly left alone as the authorities, wielding almost entire state resources, work tooth and nail to root it out. The witch hunt, acknowledged by Erdogan himself, has reached to a degree where participants of the movement have seriously started debating of entirely leaving the country.

Participants of the movement always say that their dream is way big to fit in the constraints of Turkey. Perhaps it is time to jump out of these constraints. At least for now.