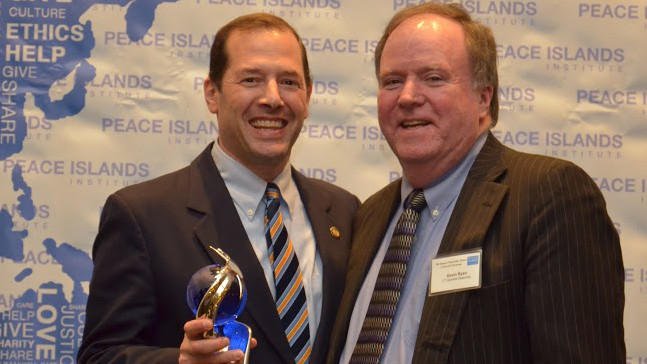 “I’m deeply honored to have been selected to receive this recognition from the Peace Island Institute, an organization that is committed to protecting children, safeguarding the environment, and promoting peaceful coexistence,” Rep. Fleischmann said.

“We are pleased to have presented Rep. Andrew Fleischmann with our ‘Statesperson of the Year’ award for his contributions to environmental awareness and the educational field,” said Mehmet Erdogdu, Director of the Peace Island Institute’s Connecticut Chapter.

The Friendship Dinner is organized by Peace Islands Institute (PII), a non-profit organization that promotes peace, cross-cultural tolerance, and human dignity by showing support to select individuals and institutions in Connecticut that work toward promoting unity, education, welfare and progress. The group supports practices to achieve world peace by creating the realms of peaceful coexistence, or “peace islands”.

“PII is a great institution that brings people together with varied backgrounds and perspectives to share ideas for the good of all people,” said Rep. Kevin Ryan (D-Montville). “I am very pleased to see Andy Fleischmann recognized for hard work and accomplishments. He is most deserving and I congratulate him.”

Andy Fleischmann has been representing the 18th Assembly District in the Connecticut Legislature since 1995. A long-time advocate for the environment, Fleischman received a rating of 100% on the environmental scorecard with the Connecticut League of Conservation Voters. Andy has led efforts on a number of major education reform measures, including empowering the State Education Commissioner to reorganize failing schools and school districts. Rep. Fleischmann has also led efforts to create universal access to preschool, remove harmful chemicals from school settings, and ensure that all of Connecticut’s children, from pre-school to High School, have access to a top quality education that prepares them for the 21st century workplace.

Andy also serves as CEO of Nutmeg Big Brothers Big Sisters, which provides one-on-one mentoring to children in 132 of the 169 municipalities in Connecticut. He lives in West Hartford with his wife Caroline and their two daughters.

At about the same time tonight, April 18, 2013, that a keeper of the peace at Massachusetts Institute of Technology was fatally wounded by gunshots; in the same week that some vicious destructors left bags of explosive shrapnel aimed at runners, family and children at the finish line of the Boston Marathon; in the same […]