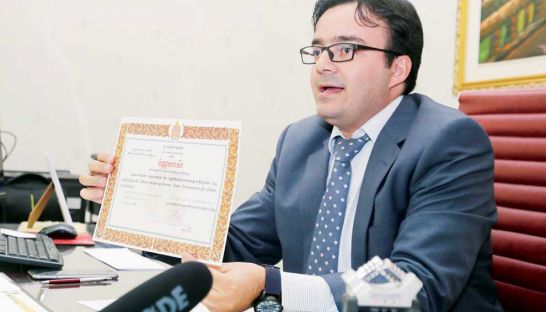 Zaman principal Isa Antepli speaks to reporters at a press conference where he and students’ parents asked that the schools be allowed to remain open in the wake of Turkey’s calls for their closure. Photo: Heng Chivoan

Zaman school officials and parents yesterday urged the Cambodian government not to shutter the schools as the Turkish Ambassador to Cambodia Ilhan Tug has requested, saying students will ultimately suffer.

The Turkish Embassy has repeatedly called for the schools’ closure in recent weeks, citing their links to Fethullah Gulen, whom the Turkish government accuses of orchestrating a recent coup attempt.

But school officials and parents asked the schools be allowed to continue operating, stressing at a press conference that the schools have no terrorist ties.

Bou Anovita, parent of a fifth-grader at the primary Zaman International School, said most students have deep attachment to the schools as they typically begin to study there in kindergarten, as her daughter did.

“We appeal to the government not to close the schools,” she said. “It will affect my daughter’s feelings. She wants to study here. The environment and the program here is very good.”

During a meeting with Foreign Affairs Minister Prak Sokhon earlier this week, Tug reiterated his case for the closure of the Zaman schools in Cambodia. Last month, the ambassador said his country was seeking the closure of all schools affiliated with the Gulen Movement, founded by Fethullah Gulen.

The total enrollment for the primary and secondary schools along with Zaman University is about 2,000 students, said Hakan Atasever, public relations director for Zaman. Isa Antepli, principal at the primary campus, said the school has been open for nearly 20 years and continues to expand, with a new enrollment of more than 400 students.

“Our school is not related to any terrorists,” he said.

But it’s only “natural” the schools would claim not to have any ties with the so-called Fetullah Gulen Terrorist Organisation, Tug said yesterday.

“We should not forget that concealment is their key tactic,” he said in an email. “The members of this cult are ordered to disguise their affiliation with Gulen.”

He also cited the “Gulen Schools Worldwide List” where the Cambodian schools are listed. “The Maarif Foundation was established in Turkey to seamlessly take over the schools so that the education of these students will not be effected in any way, if requested by the authorities of the relevant countries,” he said.

Sokhon said his ministry already conveyed the request to close the schools to related officials, in particular the Ministry of Education. But officials will have to make their own determination as to whether the schools are actually connected to a terrorist organisation.

“That would mean solid proof, something we have not received yet,” Sokhon said in a message yesterday.

Officials would also need to consider legal and administrative procedures, and so far, the schools have not violated any Cambodian law or regulation, he said.