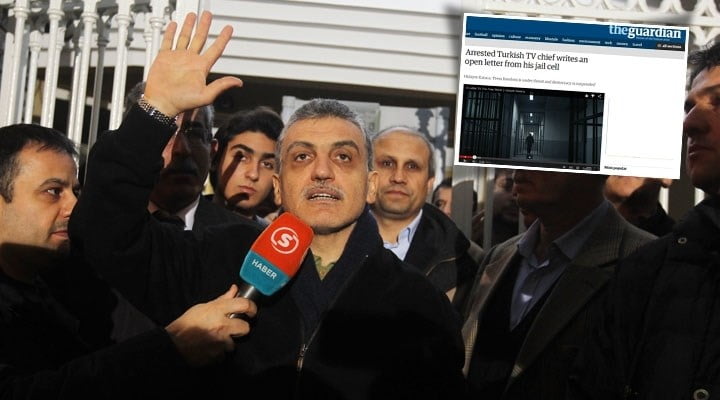 Arrested journalist Hidayet Karaca's letter detailing the threats that the media in Turkey face published by the Guardian, one of the leading British daily.

Hidayet Karaca: ‘Press freedom is under threat and democracy is suspended’

The charges relate to the screening five years before of an episode in a soap opera on one of the group’s channels. Karaca, general manager of the Samanyolu Broadcasting Group, was arrested along with more than two dozen senior journalists and media executives. Most were soon released.

Now Karaca has written a letter from behind bars, which has been voiced (see the YouTube video above) and can be read in full here:

My name is Hidayet Karaca. I’m writing this letter from a jail cell, trying to reach out to the free world.

I am the general manager of a leading national TV network called Samanyolu, which has 14 broadcast channels in Turkish, English, Arabic and Kurdish, dozens of radio stations and popular news portals.

We have always been strong defenders and promoters of fundamental rights, the rule of law and democracy and will continue to do so in full compliance with rules, regulations and the law.

I am a victim of a witch hunt that has been waged on the free, independent and critical media in Turkey because the increasingly authoritarian government does not like criticism as well as the exposure of major wrongdoings within government agencies.

Any journalist who uncovers the dirty laundry of senior government officials is immediately labeled a traitor and subjected to character assassination, harassment, persecution and even prosecution under trumped-up charges with no evidence at all.

It is clear that President Recep Tayyip Erdoğan and his allies in the government have declared a total war on the independent media against the background of massive corruption investigations that incriminated senior government officials between 17-25 December, 2013.

Since then, the government has resorted to all sorts of intimidation tactics to muzzle the media and get rid of the corruption scandal.

First, the government tried to force our network into bankruptcy by intimidating our advertisers, which has taken a toll on our revenues. Then the regulatory bodies, dominated by government loyalists, blatantly abused their power to levy financial penalties on our network and to stop our programming, which covers newsworthy developments.

While we only had one or two fines levied on us by the regulatory body in our 21 years of broadcasting history prior to December 2013, fines started to rain down on our network since then because we covered news concerning corruption files. In total, we are facing some $2m in financial penalties.

In the meantime, the repression and pressure in general has gone from bad to worse, resulting in raids on journalists’ homes and offices, and the arrest of teenagers for allegedly insulting the president.

The government has pushed anti-democratic bills through a rubberstamping Parliament, subordinating the judiciary to the executive branch and created special courts to prosecute — or rather persecute — critics and opponents.

On 14 December, 2014, police raided media outlets and detained dozens of individuals, including me. The prosecutor, citing an episode that was aired five years ago as part of a now-discontinued fictional TV series, detained not only me but also the producer, director and scriptwriters of the series as well as even an assistant who only worked as an intern for some time.

We are all charged with “forming and leading a terrorist organisation” based on this episode, which featured Turkey’s fight against terrorist groups, including al-Qaida. The whole investigation, as we understand it, is based on a complaint filed by a senior leader of a Turkish pro-al-Qaida group who claimed the fictional episode smeared his name.

It was certainly no coincidence that I was tried by a judge who did not hide his affection and praise for the ruling party, which wants to muzzle the free press anyway. I told the judge that if scriptwriters, actors, producers, directors and network managers were charged under counter-terrorism laws based on a soap opera, this was a sham trial and politically motivated.

The detention of media professionals coincided with the anniversary of the corruption investigations that the government wanted to sweep under the rug. The raids also aimed to distract the public attention away from the corruption scandals.

I knew the judgment concerning me was already rendered before I even appeared before the judge to defend myself. I asked the judge to explain what terrorist organization I supposedly belong to and where its guns and ammunition were.

The judge could not respond. But he went ahead anyway and put me in jail pending trial. It has been almost a month since I lost my freedom.

When faced with a barrage of criticism and condemnation at home and abroad over the detention of journalists, Turkish leaders described this as part of an international conspiracy. President Erdoğan even went ahead and adopted a hostile position against the European Union, telling EU leaders to mind their own businesses.

There is growing pressure on the media and frankly on everyone who simply exercises his or her democratic right to freedom of speech and expression. The right to dissent is seriously at risk in Turkey. Critical journalists were dismissed from their jobs via a phone call to media outlet owners from political figures.

The headlines in most newspapers were drafted not in the editorial rooms but in political circles. Businesses that place commercials in critical and independent media are under threat by the government.

An Orwellian democracy is in the works as the government has turned the intelligence organization into a partisan detective agency busy with profiling unsuspecting citizens, intruding into their private lives. A McCarthy-type witch hunt has been pursued against anyone who fails to toe the line with the prevailing ideology of the ruling party.

That is why tens of thousands of public employees, many in the police and the judiciary, were reassigned, removed or even purged without benefits. Civic groups that advocate freedom, democracy and rights are also targeted by this witch hunt.

My name is Hidayet Karaca. I am making this call from prison. Press freedom is under serious threat and the democratic regime is suspended in Turkey. The climate of fear is having a chill effect on all media groups that are not in line with government policies and that were forced into silence.

Despite this entirely bleak picture, I never lost my faith in democracy. I know I am paying the price for standing up for what I believe. It is the price that perhaps has to be paid over freedoms, liberties, rights and, above all, democracy.

The media has a responsibility to inform the public about what the government is up to. I am at ease with my conscience as I did my best to serve the public interest in my capacity as a media professional. I did my job and will continue to do so for as long as I can.

It is signed Hidayet Karaca, Prison No 6, Cell Block A5, Silivri Prison