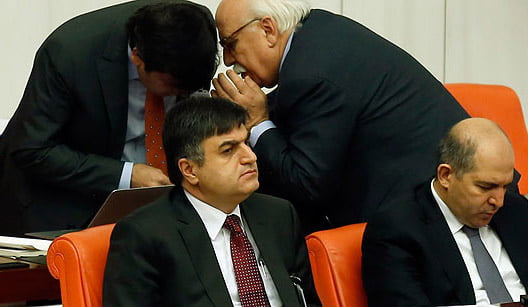 Yusuf Tekin, the undersecretary of the Ministry of Education, is seen attending a parliamentary session. (Photo: Today's Zaman, Mustafa Kirazlı)

The Taraf daily published a number of new documents on Monday that showed the Ministry of Education has profiled its staff based on their ideological and religious backgrounds.

The documents, which date back to September 2013, suggest that ministry personnel who voiced criticism of the Justice and Development Party (AK Party) government and who are members of religious or faith-based groups were “noted” in official communiqués. The order for the profiling activities reportedly came from Yusuf Tekin, the undersecretary of the Ministry of Education, and was coordinated by Atıf Ala, head of the ministry’s Directorate General of Basic Education. Taraf said Ala is the younger brother of Prime Ministry Undersecretary Efkan Ala.

The profiling documents have added fuel to an already heated discussion about profiling activities in Turkey. Starting last month, the Taraf daily published several confidential documents suggesting that the AK Party and the National Intelligence Organization (MİT) profiled individuals linked to some religious and faith-based groups. The party admitted the authenticity of the documents but argued that no action was taken to implement the policy prescriptions indicated therein.

One of the profiling documents, published by Taraf on Nov. 28, shows that the National Security Council (MGK) advised the government in 2004 to adopt legal measures that would impose harsh penalties on some religious and faith-based groups, in particular the Hizmet movement, which was inspired by Turkish scholar Fethullah Gülen.

The two-page MGK document was signed by Prime Minister Recep Tayyip Erdoğan, then-Foreign Minister Abdullah Gül, then-President Ahmet Necdet Sezer and Cabinet members as well as military commanders of the time. The document urges the Foreign Ministry, Interior Ministry and MİT to closely monitor and report on the activities of the Hizmet movement at home and abroad. It further advises the government to instruct the Interior Ministry and Ministry of Education to investigate and monitor schools affiliated with the Hizmet movement.

According to new documents published by Taraf on Monday, many Ministry of Education staff members were profiled as “members of the Hizmet movement,” “supporters of the Nationalist Movement Party [MHP]” or “social democrats.” The documents recommend that those profiled staff members should not be promoted or given high posts at the ministry.

One of the profiling notes read: “Negative. He has been promoted due to his great knowledge of ministry regulations. His promotion may be annulled. He has an easily affected nature. He has different ideas; he is not close to us [the AK Party]. He is an old supporter of the MHP.” Another note said: “He has different ideas. A social democrat. Negative. He has a negative perception of graduates of religious imam-hatip schools. He should absolutely not be promoted.” One other note said: “An F-type [referring to his membership in the Hizmet movement]. He has weak communication ability. He should not be promoted. He has ties with the [Hizmet] community. He is a disagreeable person.”

Taraf also said the profiling documents were stored on Tekin’s laptop. However, it did not elaborate how the documents were obtained by its journalist, Mehmet Baransu.

Previous reports about the profiling activities of the government and MİT were also penned by Baransu. The journalist is currently undergoing an investigation on charges of acquiring confidential documents crucial to state security, revealing information that is forbidden to announce and political and military espionage. He may face a prison term of up to 43 years for the charges. The investigation followed a joint criminal complaint by the Prime Ministry, MİT and the MGK earlier this month.

The Ministry of Education issued a press release on Monday afternoon denying the accuracy of the Taraf report. It said the report does not reflect the truth, as it has never been engaged in profiling activities against its staff. “Such activities will not happen in the future, either,” the ministry added.