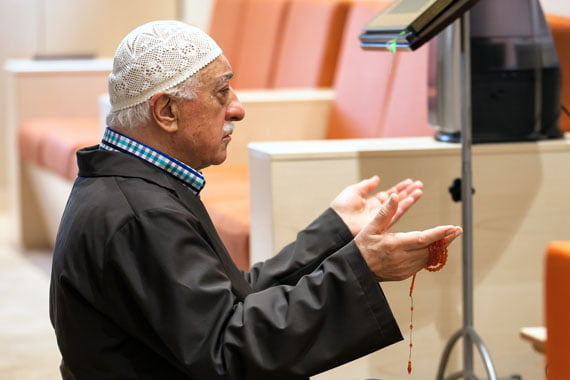 In his message Gülen expressed his sympathy to Arınç over the passing of his brother and stated: “When I found out about the sad death of dear Yıldıray Arınç, the brother of distinguished politician and statesman Bülent Arınç who formerly served as a speaker of Parliament and deputy prime minister, I felt very sorry [about the situation]. I extend my condolences to Mr. [Bülent] Arınç and the family and wish that Allah gives them patience [to deal with their loss].”

While deputies, state officials, former ministers and large number of people gathered during the funeral of Yıldıray Arınç in Manisa, there was no representative from the Justice and Development Party (AK Party) government present at the funeral.

Republican People’s Party (CHP) Chairman Kemal Kılıçdaroğlu, the Parliament Speaker’s Office and the Manisa branch of the Felicity Party (SP) each sent a wreath to the funeral.

There were no messages of condolence or wreaths sent by the AK Party government, the Prime Ministry or the Presidency for Arınç’s loss on Tuesday.
After his statements on a TV show on Jan. 29 criticizing the AK Party government and President President Recep Tayyip Erdoğan for the government-orchestrated witch hunt against the Gülen movement, Arınç was targeted by pro-government Twitter trolls and dailies.

Former Ministers Ergin and Çelik were also targeted by pro-government and pro-Erdoğan circles after they announced their support for Arınç.

Meanwhile, as part of the witch hunt against the Gülen movement in Manisa, six people — including the former doctor of Arınç, Fahrettin Er — were arrested on Tuesday.

Educational institutions, student dormitories, charities and media outlets established by those inspired by Gülen’s views have been targeted in government-orchestrated operations across Turkey since a major graft scandal was revealed in December 2013, implicating members of the AK Party government and people from the inner circles of Erdoğan.

Without providing any concrete evidence, Erdoğan accused the Gülen movement of plotting to overthrow his government and said that sympathizers of the movement within the police department had fabricated the graft scandal. The Gülen movement strongly denies the accusations.