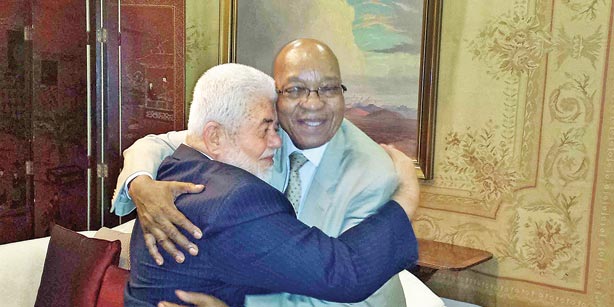 Zuma has said he will support Star College, a Turkish school system operating in his country, regardless of attempts by the Justice and Development Party (AK Party) to shut it down along with other Turkish schools in Africa. Zuma’s comments came during a meeting with the members of the executive board of the Star College group. He assured the Turkish delegation that he will continue to support them, reportedly urging them to continue their work and assuring the delegation that the schools will always be welcome in South Africa.

During a joint press conference with his Turkish counterpart Abdullah Gül in Ankara following bilateral talks and meetings between delegations, Kenyatta also expressed Kenya’s gratitude to the Turkish schools in his country, saying that Kenya applauds the Turkish schools’ efforts and considers them to be part of Turkish investment in the nation.

“We look positively toward Turkish investments; we are actually here to try to promote even more Turkish companies and investors to look toward not just the Kenyan market but the regional market. The investments and schools are very sizable, something that again we do appreciate,” he said.

The African leaders’ remarks in support of the Turkish schools in the country came after several reports had circulated in the media saying that Foreign Minister Ahmet Davutoğlu had sent orders to Turkish embassies to take steps to close the schools located abroad.

As a result of the Turkish government’s pressure on foreign countries, a Turkish school in Gambia immediately closed, according to some reports in the Turkish media. Prime Minister Recep Tayyip Erdoğan personally asked Iraqi Kurdistan Regional Government (KRG) Prime Minister Nechirvan Barzani to close Turkish schools in the autonomous region of Iraq, according to sources close to the KRG prime minister. Erdoğan also called on the administration of Pakistan’s Punjab region to shut down its schools linked to the Gülen movement.

The attempt to shut down the schools comes at a time when the Hizmet movement has been subjected to an alleged smear campaign by the Turkish government, whose prime minister and many high-level officials are implicated in a sweeping corruption scandal that went public on Dec. 17, 2013.

Ufuk Education Foundation General Manager Süleyman Deşdemir was in the delegation that visited Zuma. Deşdemir said: “Star College has been active in South Africa for 15 years with eight branches and 3,000 students. Our school in Durban has the highest success rate in the country.”

There are many Turkish schools in Kenya because it is the biggest and most cosmopolitan country in East Africa. The first Turkish school in the country was established in 1998 and, now, a total of eight Turkish high schools boast alumni who have benefited from college education in 74 countries.