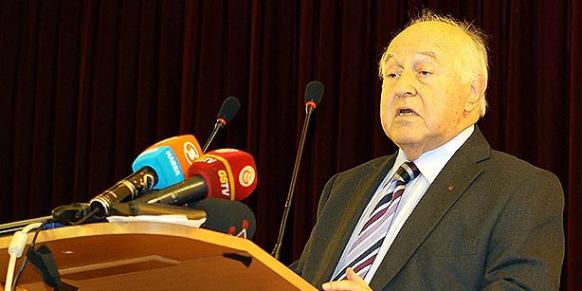 The pro-government media has been publicizing the allegations of Galatasaray Sport Club Chairman Duygun Yarsuvat against the Gülen movement since his election in October 2014. (Photo: Cihan via galatasaray.org)

The latest embodiment of this hypocrisy was seen in the pro-government newspapers Sabah and the Daily Sabah, which are published in Turkish and English respectively. Referring to a speech given by President Recep Tayyip Erdoğan on Saturday, Sabah reported that the “parallel structure” — an Erdoğan-invented term used to refer to the Gülen movement — is cooperating with Israel’s intelligence agency, Mossad. 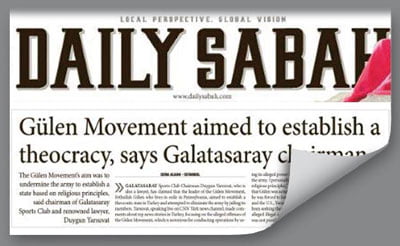 Meanwhile the Daily Sabah reported on Monday that Gülen seeks to achieve a theocracy in Turkey, and also referred to Galatasaray Sport Club Chairman Duygun Yarsuvat, who is currently struggling to get out of the club’s worst financial crisis in its history.

In a speech in İstanbul on Saturday dedicated almost entirely to his case against the “parallel structure,” Erdoğan addressed “honest people at the base of the parallel structure,” meaning the followers of the movement, and warned there “could be no excuse” for them “to remain under this roof.”

Erdoğan has launched a war against the Gülen movement after a scandalous corruption investigation targeting people in his inner circle became public with a wave of detentions on Dec. 17, 2013. Erdoğan blamed police officials, judges and prosecutors he claimed were linked to the Gülen movement for the investigation, which he branded a “coup attempt.”

Since then, Erdoğan alleged that the movement is a “pawn” of “foreign imperial powers” and of an obscure “greater mind” plotting to undermine Turkey, but Saturday’s remarks mark the first time he alleged links with the Israeli intelligence service without providing any evidence.

The investigation stalled when the prosecutors overseeing the case were removed and thousands of police officials, judges and prosecutors were reassigned or removed as part of his fight against the “parallel structure” since then.

The hypocrisy displayed in relation to the Gülen movement comes amid a rollback of reforms that alarmed both domestic critics and international rights groups. Erdoğan and AK Party circles blame the Gülen movement and its sympathizers in the state bureaucracy for any setback that the government faces.

In its annual report released last week, US-based watchdog Freedom House stated that Turkey has drifted further from democratic reforms, with former Prime Minister Erdoğan gaining the presidential post and overseeing government attempts to quash corruption cases against his allies and associates as well as with greater interference into the media and judiciary.

The European Union, which Turkey aspires to join, has criticized the government’s handling of the corruption probe and called for transparency in addressing the graft claims.

According to a story in the Bugün daily, Galatasaray might shut down some of its operations if Yarsuvat’s administration does not find a way to pay TL 41.6 million in taxes and TL 1. 428 billion in club debts before May. 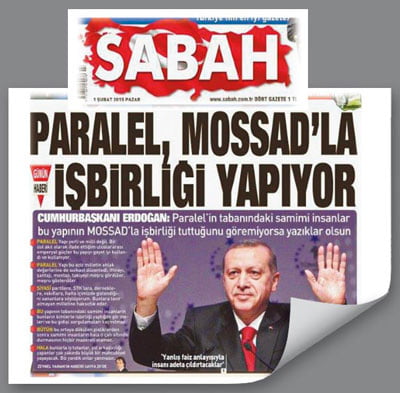 On Dec. 26, 2014, Galatasaray Vice-Chairman Abdürrahim Albayrak and soccer club players went to see President Erdoğan in a surprise visit to the newly built presidential palace, also known as Ak Saray, amid strong criticism from the club’s fans who are saying the new administration is trying to get Erdoğan’s sympathy in order to solve their debt problem.

Speaking to CNN Türk last week, Yarsuvat claimed that Gülen aimed to get rid of the army and establish a state based on religious principles, later contradicting his argument by saying the Gülen movement was actually started by the US. The Daily Sabah quoted Yarsuvat — who was once a lawyer on the Balyoz (Sledgehammer) coup case where the suspects were mostly members of the military — claiming the movement had attempted to eliminate the army by jailing them, a process which was facilitated by members of the Gülen movement in the judiciary. Yarsuvat also blamed former Galatasaray chairman Ünal Aysal and his administration for the club’s financial crisis.

Responding to Yarsuvat, Aysal said on Monday that he does not want to enter into an argument with Yarsuvat. Rejecting Yarsuvat’s allegations of a financial crisis, Aysal referred to a Turkish proverb saying, “I look at the argument if it is an argument, then look at the man [who made the argument] to see if he is a man!”

Earlier in December 2014, Yarsuvat claimed that a match-fixing case was started after the Fenerbahçe soccer club’s Chairman Aziz Yıldırım refused to donate $50 million to the Hizmet movement. Yıldırım denied in a written statement on Fenerbahçe’s official website on Dec. 17 that he had ever spoken to any person or group about the alleged $50 million donation mentioned by Yarsuvat.

Responding to the news in a written statement on Dec. 17, 2014, Nurullah Albayrak, Gülen’s lawyer, said the allegation made by Yarsuvat is ludicrous. Albayrak wrote that the timing is noteworthy in that Yarsuvat’s allegations came after a tax penalty was given to the Galatasaray soccer club on Dec. 12.

Adnan Polat, ex-chairman of Galatasaray, reacting to Yarsuvat’s statements in December, said these statements are political and not necessary, and can only harm Galatasaray. Polat blamed Yarsuvat’s administration for an inability to manage the club’s financial issues.

Elif Aslaner, a religious education teacher who gave birth on Wednesday at a private hospital in Bursa, was detained due to her alleged links to Turkey’s Gülen group on Friday. Aslaner’s husband said his wife had preeclampsia and suffered from convulsions when she gave birth to her first baby and remained in a coma for two days.