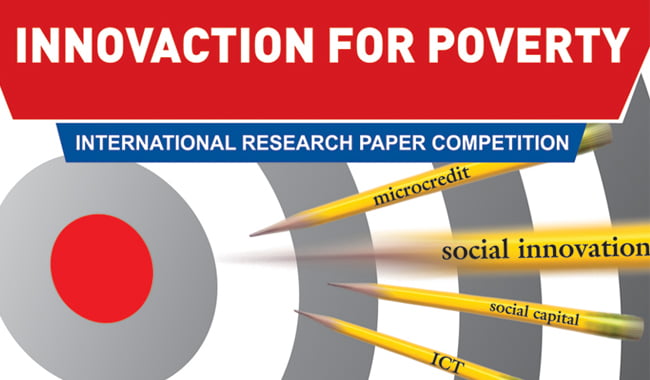 Objectives: The competition purposes to produce applicable and innovative ideas for struggling poverty and support to human and social development, create social awareness and make social impact by implementing these ideas.

Subtitles: Innovaction for Poverty; In line with the aforementioned aims we invite papers on a variety of topics including, but not limited to:

Terms of Application:
1. The competition is open to graduate students pursuing Master or Ph.D. programme in all over the world.
2. The participants can write a research paper on any of the above noted topics or another topic related to purposes of the competition.
3. Papers should be innovative and make social impact.
4. The research papers should be sent via e-mail.
5. Authors take responsibility for the ideas in the research papers.
6. The evaluation of the papers will be carried out by the Commission of Evaluation, composed of academicians, chosen by KYD.
7. By submitting an entry for this competition, it is assumed that the work is an original effort of the entrant and has not been published anywhere else and has not been awarded any national or international prize.
8. The copyright of the research paper is also transferred to KYD and it means they can use part or whole of the document, giving the author’s name.
9. The awards belong to author of the research paper and cannot be transferred to someone else.
10. Co-authored papers are eligible. If an awarded paper is co-authored, the award will be divided equally among the co-authors.
11. If an award-worthy paper has been awarded before or concurrent to this contest the award will be taken back and that will not give any right to the other attendees.
12. Attendees accept that the study belongs to her/him. KYD does not condone fraudulent projects of any kind. This includes plagiarism and the presentation of another’s work as one’s own. Fraudulent proposals will be rejected; if such a proposal is found to be fraudulent after receiving a grant, KYD will demand the return of the awarded amount.
13. KYD reserves the right to make no award if none of the entries is considered worthy.
14. Expenses for travel and accommodation will be covered for the awarded authors.
15. It is also assumed that all personal details provided by the author in application form are correct and verifiable.
16. The attendees considered to accept these rules.

Requirements:
1. The language of the competition is English.
2. The abstract of the research paper must be submitted not later than 12 May 2014.
3. Abstracts must not be longer than 500 words and must include the purpose, the research question and the importance of the study, the methodology and the findings.
4. The research paper must be typed in 1.5 spaced, in APA style and must not exceed 20 papers.
5. The author’s identity must not be identifiable in any way from the paper. The information about the author will take place in application form, provided from www.kimseyokmu.org.tr

Coordinator: The research paper must be sent to [email protected] mail address with application form that can be found on http://www.kimseyokmu.org.tr.

Hadi Uluengin, April 6, 2011 Before studying the Gülen movement (aka Hizmet movement), first, we must agree on definitions. Such a consensus will place the discussion on a more appropriate and objective foundation. This lexicon agreement is required first and foremost because of recent claims and accusations—which are perhaps true, perhaps false, or perhaps half true, half […]