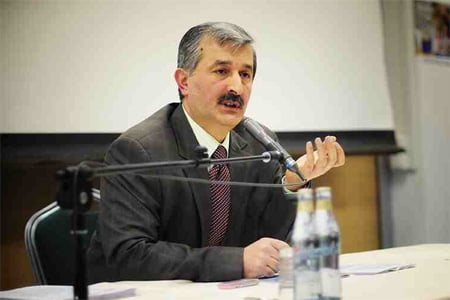 Fethullah Gülen has so far been designated with numerous titles: Islamist, pro-Christian, pro-sharia, pro-Vatican, pro-ummah, pro-Turan (Turkish ethnic nationalist), pro-American, pro-Israel, Calvinist, etc. Those who never listened to him or read his books have attacked him with as many defamations as they wished. But these decades-long groundless attacks have never been enough to blow off even a tiniest piece from this giant rock.

Now, we are witnessing these ruthless attacks at an international level. Mr. Gülen’s reputation has recently even attracted million-selling German magazine Der Spiegel. Der Spiegel is a leading magazine, and it is the master of its Turkish counterparts, thus it probably felt the need to manifest its difference and have jumped on the bandwagon of slander by referring to Mr. Gülen as “godfather,” a never-before used title.

Journalism can sometimes be an utterly cruel and ugly job. The journalist who wrote this Gülen report for Der Spiegel is Maximilian Popp, a 26-year old young and enthusiastic journalist. And this reporter, relying on the power of the magazine he works for, portrayed a thinker with a growing worldwide reputation as “godfather” and millions of his supporters as members of mafia.

I believe it was almost 1,5 years ago when Maximilian Popp told me he was researching on the Hizmet Movement (Gulen movement) and came to speak with me. As he was studying International Law and Politics in Istanbul since 2007, he had quite an adequate level of Turkish, so we had our conversations mostly in Turkish, switching to translations into German momentarily when it was too difficult for him. Interestingly, he did not have a camera or recorder, and he barely took any notes during our talk. I thought he must be very clever and that’s why he did not need to record anything.

One of his questions was about our connection to Gülen. He was very surprised when I told him that we published a full-page article by him once every week. I was surprised too, after finding out that this clever researcher of the Hizmet Movement was unaware of this page that was there for many years. Popp had never browsed through this newspaper that he was supposed to research on, nor did he read a single book written by Mr. Gülen.

Another question he asked was regarding who had appointed me to my position in Germany. He was not satisfied when I said “Ekrem Dumanlı” (chief editor of Zaman Newspaper in Turkey). He was expecting to hear me say Fethullah Gülen. “Why (did Dumanlı appoint you here)?” he asked. “Would you keep the former editor with you when you become the new editor?” I replied, to which he did not insist further. “Why are you supporting Gülen?” he then asked. I said that thinkers like Gülen are rarely found in this day and age, his ideas are needed not only in Turkey but also worldwide, and that we were supporting him for the same reason they were favoring Goethe or Habermas.

His questions were extremely biased. He even considered our office as a mob shelter, and for him we were after other goals under the pretext of journalism. His convictions changed somewhat after he learned that I have a major in communications, after seeing the folder of the summary news that we covered in the newspaper, and the daily agenda report.

When Popp popped in around two months ago, he was a bit angry. Some of his Turkish friends told him that Zaman Newspaper had published a negative and distorted article about him. He was surprised when I said I wrote the piece, and that it was available on the web. He did not know that Zaman’s Germany edition had a website. He read the article and was comforted when he realized there was no distortion. His Turkish friends who were busy profiling others had made him believe a foolish lie that Zaman was a medium of communication among members of the “community.” This conviction also evaporated when he saw all the pdf files of the newspaper available on the web. He asked whether Mr. Gülen’s articles were among the pdf pages; we showed him that they were. He was relieved. Before he left, we had some tea together and chatted for a while after in which he said his report was going to be published soon.

This so-called “research” which lasted for about two years was eventually published this week. If all researches in Der Spiegel are prepared in the way Popp did, it is difficult to say that this magazine will continue its place in journalism for a long time.

I will continue to address this issue tomorrow. Let me cite one thing before I close. Popp, the clever journalist, quotes Mr. Gülen hatching out a chick in forty days. Distortions of the phrases and even the figures are quite normal for such a biased report that hatched in Der Spiegel’s incubator for two years. This report smells just like a dead chick that hatched out in forty days.

The Spanish translation of the Qur’an, Turkish cuisine recipes and translations of Fethullah Gulen’s books, in particular, were in high demand. Among them, the Qur’an translations and Gulen’s “Messenger of God: Prophet Muhammad” were sold out before the fair came to an end.