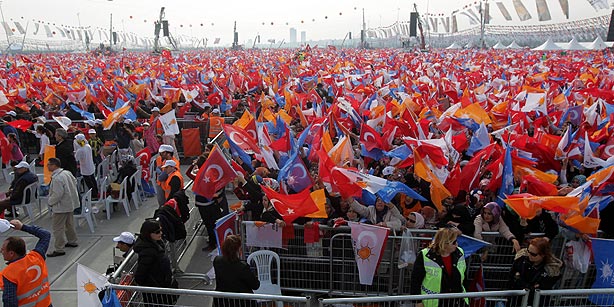 The existing political indications and thought-provoking remarks made by Prime Minister Recep Tayyip Erdoğan suggest that the Justice and Development Party (AK Party) may well get more despotic under a discourse of “advanced democracy” if it wins a big victory in the March 30 local elections.

It is evident to almost everyone who is closely following the political and social developments in Turkey that the March 30 elections are more than merely municipal elections and that they will have a series of widespread impacts on political parties, their leaders, their members and the people. The big question is what the AK Party, which has drawn the ire of many domestic and foreign observers and normal citizens due to a number of controversial and anti-democratic practices it has instituted recently, will do after the elections.

One of the first deeds of the party, doubtlessly acting on an order to come from the prime minister, will probably be to ban access to Facebook and YouTube, of which he had dropped hints earlier this month. In a live televised interview on March 6, Erdoğan said the government would consider shutting down popular video-sharing website YouTube and social media network Facebook. The prime minister, who is fighting a corruption and bribery scandal that has already rattled his AK Party government, thinks a ban on these sites will stop the social media leaks that have embarrassed the government.

In a step that drew condemnation at home and abroad, the AK Party government blocked access to Twitter last week. The government cited three court decisions as being behind the ban, but it soon turned out that no Turkish court had requested that Twitter be blocked or banned. Many linked the notorious Twitter ban to wiretapped recordings that have been leaked via the social media since Dec. 17 of last year, when the major corruption and bribery operation was launched. The recordings have revealed some AK Party government officials’ alleged hand in corruption and other forms of wrongdoing.

Following the March 30 elections, the AK Party is planning to reintroduce a draft law pertaining to the National Intelligence Organization (MİT) to Parliament. The draft law had been brought to Parliament in February, but was later withdrawn due to the opposition parties’ strong objection to the draft. The opposition says the draft gives extraordinary powers to MİT, including more scope for wiretapping and legal immunity for MİT officials.

If passed, the law will introduce penalties of up to 12 years’ imprisonment for anyone who publishes highly classified MİT documents, a move which critics say is designed to deter journalists from making secret documents public.

For critics, the draft bill will turn Turkey into an “intelligence state” and ensure legal cover for Prime Minister Erdoğan, who has found himself struggling with a corruption investigation since Dec. 17, 2013.

In addition, if the draft law is passed, MİT will have unfettered access to the archives and databases of every ministry and will be able to collect any kind of data on Turkish citizens. What is more, the law requires private companies to hand over customer data and technical equipment when requested. The law will also allow MİT to conduct operations against possible threats overseas. The organization will be authorized to wiretap phone conversations overseas upon the orders of the MİT undersecretary and his aide.

The March 30 polls will also be followed by a declaration of autonomy for Kurds. Selahattin Demirtaş, the leader of the pro-Kurdish Peace and Democracy Party (BDP), announced in mid-February that it would declare autonomy for Kurds in Turkey’s southeast after March 30. The declaration of autonomy might be followed by the release from prison of Abdullah Öcalan, the jailed leader of the terrorist Kurdistan Workers’ Party (PKK). BDP deputy Pervin Buldan publicly said Öcalan would be set free in 2015.

Since the Dec. 17 corruption and bribery probe, Prime Minister Erdoğan has threatened to order an “operation” against certain civil society organizations and business groups that have voiced demands for the prime minister and his government to be held accountable in the face of alleged irregularities. The prime minister said prosecutors are currently working on an operation and a number of investigations that will come after March 30.

The would-be operation will probably target first the faith-based Hizmet movement, which is inspired by Turkish Islamic scholar Fethullah Gülen. Following the launch of the corruption investigation, the prime minister was quick to attribute the probe to the “parallel state,” a veiled reference to the Hizmet movement. He said a gang had nested itself within the Turkish state in an attempt to topple his AK Party government. However, weirdly enough, while attributing the probe to the Hizmet movement dozens of times, the prime minister has not shown a tiny shred of evidence to suggest the existence of a parallel state or gang nested within the state.

In some of his recent speeches, Erdoğan, in addition, has threatened “action” against the Turkish Industrialists and Businessmen’s Association (TÜSİAD), the Turkish Confederation of Businessmen and Industrialists (TUSKON) and the Doğan Media Group, which criticized the prime minister and his government over the claims of corruption and bribery. With “action,” the prime minister is probably referring to tax inspections and heavy monetary penalties to punish those associations and business groups for their alleged “anti-AK Party stance.”

In a similar attempt, Prime Minister Erdoğan — backed by his pro-government media organs — targeted Bank Asya, a leading Turkish participation bank affiliated with the Hizmet movement, shortly after the Dec. 17 operation. Claims emerged that Bank Asya had benefited from the steep rise in the value of the US dollar when the corruption investigation became public and affected Turkish markets. According to the claims, the bank had made a profit of $2 billion by purchasing large quantities of US dollars prior to the corruption operation.

The bank denied the claims, saying they were baseless, and took legal action against those who had made the claims. In addition, observers said the bank would have needed to purchase $34 billion in order for it to make $2 billion in profits. The assets of the bank, however, stand at $15 billion, proving that these speculations are baseless. Bank Asya’s total deposits amount to TL 17 billion ($8.5 billion).

Last but not least, the AK Party is expected to shut down schools and dormitories run by entrepreneurs affiliated with the Hizmet movement after March 30. The prime minister has been telling AK Party supporters in election rallies not to send their children to these schools. In addition, the government — through the Ministry of Education — has been asking students and teachers at Hizmet-affiliated private schools across the country a number of questions about their perception of the government and its officials. These interviews have sparked a public outcry, with many likening them to the “persuasion rooms” of the Feb. 28, 1997 coup period. Many others said the government is working to profile teachers, students and their family members in terms of their ideological backgrounds in these interviews.