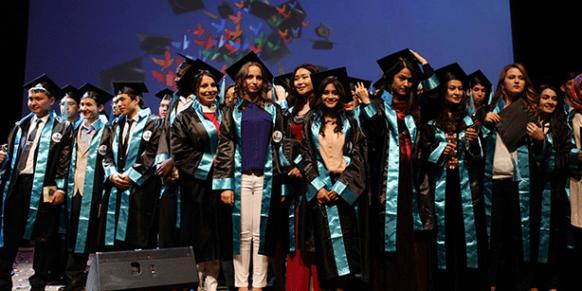 Foreign students who have come from different corners of the world to study in Turkey have shown their happiness by throwing their caps into the air at a graduation ceremony held by the Baran International Student and Cultural Federation, the Cihan news agency reported on Thursday.

Overwhelmed with emotion during the ceremony, many of the international students experienced happiness and sorrow at the same time.

Indonesian student İmas Walijah said that studying in Turkey was one of the best times of his life and that he will carry feelings of peace, brotherhood and love to his own country.

In a display of cultural solidarity, the international students entertained each other with songs, poems and sketches on stage.

Russian student Tamerlan Nusraddinov, wno studied in the department of computer engineering at a Turkish university, said, “I will definitely miss the warmhearted people I have met in Turkey so far.”

Moroccan student Sara Moutawif, who studied at Fatih University, said she would remain in Turkey for further study.

Addressing students at the ceremony, GYV Chairman Yeşil said every person is valuable because of the values, goals and principles she or he follows. Speaking about the students’ teachers, Yeşil said they can “forget their role in your existence and education,” adding that from now on the students will assist students from their own countries as their professors had done.

Extending his gratitude to the organizers of the graduation ceremony, Meral said: “We have come here from the World Trade and Investment Bridge. Nearly 500 international students assisted us there. They helped us establish business contacts,” adding, “You are not only the bridge of trade but also the strong steel ropes for bridges of the soul.”