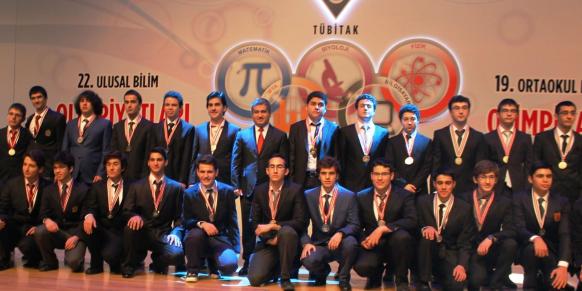 Yamanlar High School students who won medals at this year's National Science Olympiads pose for a photo at the award ceremony. (Photo: DHA)

İstanbul’s Fatih Koleji, Ankara’s Samanyolu and Atlantik, and İzmir’s Yamanlar schools, which have been under pressure from the Justice and Development Party (AK Party) government, picked up 64 medals out of a possible 120 on Wednesday in the 22nd National Science Olympiad and the 19th National Mathematics Olympiad for primary and secondary schools.

The schools are among thousands of educational institutions affiliated with the Hizmet movement — a faith-based social movement inspired by Islamic scholar Fethullah Gülen — that have been targeted by the AK Party and government circles, particularly since Dec. 17, 2013, when a massive corruption and bribery scandal went public.

President Recep Tayyip Erdoğan accuses the Hizmet movement of plotting to overthrow the government. In May, then-Prime Minister Erdoğan publicly advised AK Party supporters not to send their children to schools affiliated with the Hizmet movement. “We will not even give them [Hizmet members] water,” he vowed. Erdoğan also ordered officials in AK Party-run municipalities to seize land and buildings belonging to the Hizmet movement by any means necessary. The movement strongly rejects the claims against it, and the allegations have not been proven in any court.

Taraf said TÜBİTAK did not tell the government or Erdoğan, who is orchestrating the anti-Hizmet campaign, that the students were from Hizmet-affiliated schools and that this was why, for the first time, the schools’ names were not announced after the winners’ names at the award ceremony.

However, after the schools published newspaper ads announcing their students’ success, the TÜBİTAK administration was reprimanded by the president and other members of the government, Taraf said.