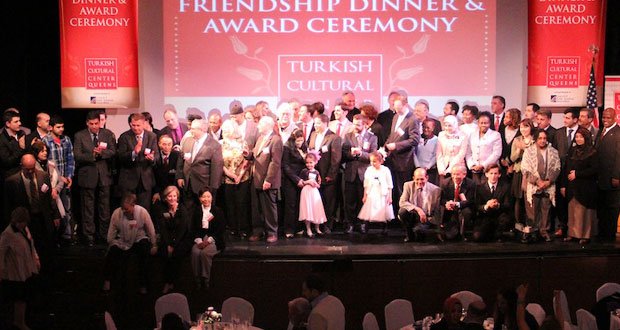 The Turkish Cultural Center Queens held its 12th annual friendship dinner and award ceremony at Flushing Town Hall last week. In the words of Turkish Cultural Center representatives, the dinner and awards ceremony brings together community leaders, elected officials, non-governmental organizations, clergy, academicians and others “to foster mutual understanding, respect and love.” There were three Friendship Awards to three women who, the TCCQ believes, carry out its stated ideal. Two keynote speakers spoke respectively of carrying out the message of Turkish educator and philosopher Fethullah Gülen and advancing multilingualism as a way of uniting with diversity. There was also a musical program that reflected the ancient Sufi tradition.

The first of the keynote speakers was Jon Pahl, professor of history and director of the master of arts programs at Lutheran Theological Seminary at Philadelphia and author of such books as Empire of Sacrifice: The Origins of American Violence. His address, “The Hizmet Movement and the Coming Religious Peace,” made reference to Steven Pinker, the Harvard psychologist and linguist who believes overall violence to be in decline, and Fethullah Gülen, Turkish-born founder of the Hizmet Movement and author of Toward a Global Civilization of Love and Tolerance, who believes that “love is able to resist and overcome all else.” Professor Pahl said that violence, ignorance and poverty are an “unholy trinity.” He has traveled widely, working at lessening the parts of the unholy trinity, visiting places that have known a good deal of strife (he showed a photograph of himself in a classroom in Uganda) but have peace movements attempting to improve burdened lives and “overcome all else.”

The other keynote speaker, Angelica Infante, is associate commissioner for bilingual education and world languages at the New York State Education Department. Formerly, she led the office of English language learners at the city’s Department of Education. She is American-born but her parents came from the Dominican Republic. She told the audience that her parents not only made her speak Spanish at home but write and learn it thoroughly, wearing down her protest that she was American and didn’t need it. She said that in time she came to believe that “the greatest gift you can give your children is the power of another language.” She is all for the state’s impending program of marking bi- and multi-lingual students’ records with seals denoting their linguistic skill. She lamented the unwillingness of anyone to recognize diversity. Instead, she said, it should be embraced, and she believes bi- and multi-lingual skill in students will hasten acceptance of it.

The first of the three Friendship Awards went to U.S. Congresswoman Grace Meng, now in her second term as representative from the 6th New York Congressional District. She was cited for “supporting the goals and ideals of International Mother Language Day” and for her “ongoing work to ensure improved education for new generations.” She returned the compliment by hailing the Turkish Cultural Center Queens for its Ramadan iftar, or evening meal, that is promoted in several neighborhoods each autumn.

The second Friendship Award winner was Carole K. Nussbaum, principal since 1992 of P.S. 203, the Oakland Gardens School, and soon to retire. She was cited “For her dedication to educating the children of our diverse borough and touching the lives of so many families for more than 50 years.” In those years she has also been a staff developer in District 32, UFT teacher center director in Districts 24 and 26 and assistant principal at M.S. 216. Jonathan Kim, a former student of hers and now a high school junior, introduced her and told the audience about the permanently positive effect she had on him. He said he was sad for other students that she was retiring and concluded by calling her “my second mother.” Nussbaum herself said she has been in Turkey twice in her extensive travels. “My hope,” she said, “is that world peace can be achieved by education.” City Controller Scott Stringer sent a framed proclamation honoring Nussbaum.

The third winner of the award was Adjoa Esinam Gzifa, whose citation was the most specific: “For her years of self-sacrifice and devotion to building a school and educating the children of Mallam in Ghana.” Gzifa, otherwise director of the Workforce Education Center at La Guardia Community College, traveled to Ghana several years ago, saw the difficult conditions schools operated under and later, with a business partner, offered to adopt the Oshiyie Primary School in Mallam and pay the tuition of its children, more than 125 in number. Two years later they founded Future Scholars of the World, a 501(c)(3) charitable organization and raised funds to build a K-9 school in a Ghanaian village and sustain its teachers and students by paying salaries and buying books, materials and uniforms and providing school-day meals.

Presenting the Friendship Award to Gzifa was Ghanaian Consul General Bernard Watson. Congressman Gregory Meeks was not at the awards ceremony but sent a proclamation that the day be called Adjoa Esinam Gzifa Day.

Eighth Bishop of Washington in the Episcopal Church John Bryson Chane has said Turkish scholar Fethullah Gülen is probably one of the greatest scholars and religious people in today’s world. Speaking at a Jan. 20 meeting of the Rumi Forum, a think tank established by Turks living in Washington, D.C., to foster intercultural dialogue, the […]