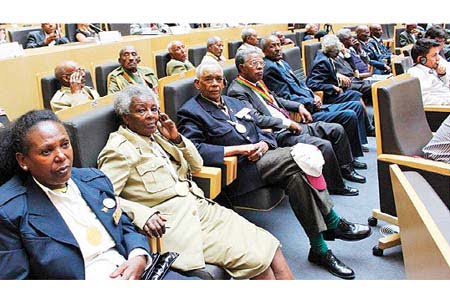 The event, titled the “Africa Dialogue Forum,” was attended by many high-ranking representatives from more than 40 countries. (Photo: Today's Zaman)

Participants at a forum organized by the African Union in Addis Ababa, Ethiopia, have discussed the contribution of the Hizmet movement, inspired by well-respected Turkish Islamic scholar Fethullah Gülen, to global peace.The event, titled “Africa Dialogue Forum,” was attended by many high-ranking representatives from more than 40 countries.

Gülen sent a message to the event saying he appreciates the efforts of the participants to achieve global peace.

Speaking at the symposium, Ethiopia Interreligious Council Secretary-General Pastor Zerihun Degu said it is a privilege and an honor to attend the forum, which was being held for the second time in Addis Ababa.

“The attendance of a crowded delegation, including international observers and press members, is proof that this forum is of the utmost importance for all of us. It is also very meaningful for this event to coincide with the 50th anniversary of the establishment of the African Union,” he said.

Journalists and Writers Foundation (GYV) Secretary-General Hüseyin Hurmalı described Hizmet as a movement of benevolence, education and dialogue, the fundamental principles and values of which were taught by Gülen and adopted by a large group of people who then came to be known as the Hizmet movement.

Professor Marcia Hermansen of Loyola University Chicago also delivered a speech at the event in which she gave modern examples of dialogue and foundations of mutual understanding. Hermansen said the Hizmet movement provides a perfect example of a culture of coexistence and dialogue.

Abdullah T. Antepli of Duke University said that there is a need to make significant investments to support social harmony and peace in the world, adding that the Hizmet movement is one of the best examples of a group that supports these values.

Highlighting the religious and cultural diversity of the Africa continent, Ethiopian Minister of Federal Affairs Shiferaw Tekelemariam said he found it very meaningful for representatives from the various religions and cultures of Africa to come together on the occasion of the event, adding that it marked the beginning of a new period for Ethiopia.

Tekelemariam also said he had visited the Turkish schools opened by the followers of Hizmet in his country and found the education they offer to be of a high standard.

“At these schools, where there is a multicultural structure, the understanding of living together is promoted despite differences. The biggest problems of today, such as discrimination, conflicts and radicalism, are discussed at these schools,” he said.

The forum participants also decided to hold a meeting in the coming months in Abant, in the Turkish province of Bolu, that will be titled “Africa with Its Experiences and Inspirations.”

The minister said the schools active in his country offer an excellent education model. “My fellow citizens have embraced these schools,” he said. Speaking of the long-established, brotherly relations between Turkey and Pakistan, “I can explain these heart to heart relations in many ways. We can feel the love from whoever comes here from Turkey. It is hard to put in words. This is brotherhood, this is friendship,” Rahman said.

The tension caused by a Supreme Board of Judges and Prosecutors (HSYK) bill that is designed to restructure the HSYJ, the witch-hunts against police officers, teachers and other public employees who have been profiled as members of the Hizmet community (Gülen movement) and the victimization of tens of thousands of people have created unease among the general public. People started reacting negatively to the accusations and slander, which went far beyond the limits of criticism against the Hizmet community, and started saying: “This is too much!