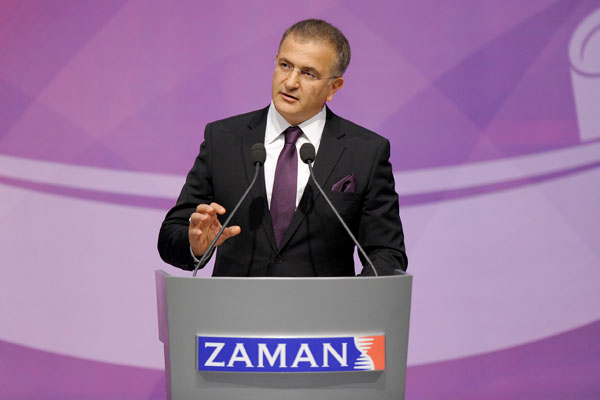 Zaman daily Editor-in-Chief Ekrem Dumanlı has described slanderous remarks used by Prime Minister Recep Tayyip Erdoğan and some members of the Justice and Development Party (AK Party) government against the Hizmet movement as highly reminiscent of insults directed at the country’s conservative-minded citizens during the Feb. 28, 1997 “postmodern coup” period.

“Agent, gang, Hashishin, cave dwellers, tools, terrorist organization, virus, tumor and so on. These men [government members] are behaving identically to the Feb. 28 prosecutors. I first heard the word ‘tumor’ being used to refer to a section of society during [the] Feburary 28 [period],” said Dumanlı on Wednesday evening during a live TV program on Samanyolu Haber TV.

In the run-up to the Feb. 28 period, former Chief Public Prosecutor of the Supreme Court of Appeals Vural Savaş referred to religious people as “vampires,” “blood drinkers” and “a malignant tumor” in an indictment he prepared in order to have the conservative Virtue Party (FP) shut down by the Constitutional Court on the charge that the party was seeking to place Turkey under Islamic rule. He also claimed that members of religious fundamentalist movements had infiltrated government institutions.

A similar campaign is currently under way against the country’s religious citizens. Prime Minister Erdoğan has, on various occasions, referred to members of the faith-based Hizmet movement as “a gang,” “a criminal group,” “a parallel state,” “a virus,” “a secret organization” and as “cave dwellers.” He even likened the movement to the Hashishin, a shadowy group that carried out politically motivated assassinations during the rule of the Seljuk Empire.

The Zaman editor-in-chief also complained that some politicians employ ugly and demeaning rhetoric, including lies, slanders and baseless accusations. “The level of politics [language used by politicians] has never been so low before. There is nothing more natural in a society than the existence of a ruling party and the opposition. People should express their opinions freely. And so should the civil society,” he noted.

Some politicians have “given in to their anger,” Dumanlı claimed. “The prime minister is using rhetoric that does not befit the culture he comes from. Take the remarks he made against people [an opposition leader and Turkish Islamic scholar Fethullah Gülen] with no children. The prime minister is a graduate of a religious imam-hatip high school. As a graduate of this school, doesn’t the prime minister know that there have been many people in the Islamic community who died before getting married? Take prophets Isa [Jesus] and Yahya [John the Baptist]. Is it a crime not to get married and have children?” Dumanlı asked.

Dumanlı also criticized Deputy Prime Minister Bülent Arınç for claiming that the prime minister had been threatened by some people from the Hizmet community over the government’s plans to shut down prep schools. “Lie is the mother of all sins. If you tell a lie, then you tell many others to make up for it. And then you turn into a lie machine,” he said, before asking Arınç to prove his claim. “Someone also told a lie about the Hizmet community having a school in Saudi Arabia where teachers make students wake up in the middle of the night to pray to God that bad things will happen to the Turkish government. This is also a lie. Hizmet does not have a school in Saudi Arabia,” Dumanlı said.

In addition, the Zaman editor-in-chief said the ruling AK Party had grown authoritarian and totalitarian since 2010. “Where is this party heading to? It is offending people. It is hurting people,” he said, mentioning remarks by former Interior Minister İdris Naim Şahin that the AK Party is run by small oligarchic elite.

When resigning from the AK Party in late December 2013, Şahin said the AK Party excludes broad segments both of the party constituency and the Turkish people. Şahin, a longtime friend and political partner of the prime minister since the days when Erdoğan was mayor of İstanbul in the 1990s, said he was very saddened to leave the party which he had once joined with great passion.

Ayhan Bermek and İhsan Kalkavan, two prominent businessmen, went on a program on Bugün TV on Thursday to say that Turkish people are deeply hurt by slanders and accusations leveled at the Hizmet movement by the prime minister.

“The Hizmet movement was born innocent and will remain innocent,” said Bermek, adding that those who claim the movement extorts money from businessmen should “repent” for their lies. The prime minister said earlier this week that the movement receives forced donations from some businessmen. Bermek also said he was delighted with his acquaintance with the movement, which he said is made up of people with good-will. “Whatever they [members of the government] say, they will not be able to stain the innocence of the Hizmet movement,” he added.

Responding to a threat by Prime Minister Erdoğan that “we will go into their [Hizmet members’] caves” — hinting at a forthcoming investigation into the movement — Bermek said, “We live in houses, not caves. We open wide the doors of our houses to our guests. The Gülen [Hizmet] movement is a movement of hearts and happiness.”

Kalkavan, for his part, said that harsh language used by the prime minister against Hizmet members saddens him and many other businessmen and citizens who are sympathetic toward the movement. “The statements used [by the prime minister] against Hizmet deeply hurt many people. It is impossible to describe the sadness of Hizmet members who were disappointed by those statements,” he said, adding that thousands of members of the movement serve in Hizmet’s schools all across the world, necessitating great self-sacrifice.

Kalkavan also said claims by the deputy prime minister that Hizmet members had threatened the prime minister are groundless. “We [members of the movement] do not have knives or weapons. We are people who seek to win other people’s hearts,” he noted.