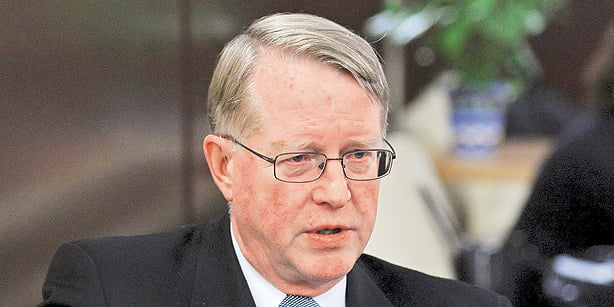 Ambassador James Holmes (Ret.) is the President and Chief Executive Officer of the American-Turkish Council, a bilateral, non-profit organization dedicated to the strengthening of U.S.-Turkish trade, investment, defense and cultural relations, and to the promotion of awareness and understanding of U.S.-Turkish issues.

The United States has no desire to use Fethullah Gülen, a Turkish Muslim scholar who lives in self-imposed exile in America, as a tool against Ankara, said James Holmes, a former U.S. envoy to Ankara.

Ties between Ankara and Turkey might be on the frosty side, but Turkey continues to be an important ally for the U.S., according to Holmes, who is currently the president of the American-Turkish Council.

There is a general conviction in Turkey that somewhere in the U.S., a button has been pushed to weaken Prime Minister Recep Tayyip Erdoğan.

This is an impossible view. I met with a group of parliamentarians in Ankara recently; their very first sentence was that Fethullah Gülen lives in Pennsylvania – as though by asserting that, the U.S. government has responsibility for what Gülen does.

My impression is that many Turks – certainly not all – use this as a way of rational explanation for something which they can otherwise not figure out. They need to understand that some things happen in Turkey because Turks do it, not because somebody else did it to them. This is clear case of Turks at sixes and sevens with each other. I am fascinated by the fact that most stories start with “U.S.-based Gülen.” This is a fact of life that he lives there. The U.S. has absolutely no interest in using Gülen against the interests of the AKP [ruling Justice and Development Party] or PM Erdoğan.

The worse thing is the assertion that the U.S. does not want Turkey to be successful. This is nonsense. [Around] 65 to 70 percent of the Istanbul stock exchange [is in the hands of] foreigners, and a lot of it is from American investors. Why would they want to continue to invest if they wanted it to fail? Turkey was, is and continues to be a valuable ally to the United States.

Many think the Gülen movement could not have become so strong had the U.S. not supported it, as it suited the U.S. policy of supporting moderate Islam.

How does Washington view the Gülen movement?

My impression is that their attitude is benign.

Yet as a superpower, the U.S. certainly uses every tool available to it.

I don’t think he fits into that category at all – meaning a useful instrument for U.S. policy. I don’t believe U.S. policy has come to the conclusion it wants to use the Gülen movement in terms of the outreach of Islam around the world.

Then how are the developments seen from Washington?

Although there is certainly a number of Turks who wish to hate the U.S., I believe that Turks overwhelmingly regard the relationship with the U.S. as valuable and valid. I am optimistic that even when you go through bad patches, there will be a point in time in which it will turn and will turn in a way which the validity and importance of relationship is reiterated and you move on from there.

Right now, we are at a point which I won’t say is at the peak. The astonishing thing is that seven months ago we were talking about the excellent relationship between the U.S. and Turkey – perhaps the best that it had been in 20 years; that was the vocabulary used when the prime minister was in Washington in May.

Within these few months, it has become a more difficult relationship. But the investor community has not panicked; they are not saying I am out of here. There is a cautious wait-and-see attitude.

Tell us what happened.

From Washington’s perspective, it really began to turn with the [September 2013] decision to buy the high-altitude air-defense system from China. That was the dominant mystification in the relationship. Then there was a pretty sharp exchange with the publication of a story that the U.S. is behind this; that really spelt out Washington’s concern, which continues to this day, that Turkey needs to take responsibility for its own actions rather than attributing everything that goes wrong in the country to the hidden hand of somebody else, namely the U.S.

The fact that relations are not exactly at their best is the reason why the U.S. is suspected of looking for an alternative to the current government.

You can’t beat something with nothing. You are imputing a capability to Gülen or to the opposition parties, which certainly has not yet been manifested in terms of the politics of Turkey. I hear that Hizmet [the Gülen Movement] might control 5 to 6 percent of the popular vote. On local elections, I hear with all else going on that the AK Party continues to have a sizable popular vote lead. If we were intent on [making] these kinds of efforts to unseat the existing government, I wish we could pick somebody who has the chance of being the winner. I don’t see that being the case. Why would the U.S. take the risk of backing a lame horse?

Don’t you think that the government is convinced that the U.S. is behind these developments?

It is possible that the PM is advised by some people and he may have read stories, but I don’t believe he believes that now. I don’t think he sees that as a rational explanation for this.

I think it has to do with where you find ways to be successful in a campaign environment with your core constituency. And that’s certainly the explanation Washington finds for this; it is domestic politics at a highly heated campaign time.

Will the AKP remain the main interlocutor in the eyes of Washington?

[Yes], but this is fundamentally the choice Turks are making. It is simply the way we see local politics for this season and also probably for the parliamentary elections. There continues to be strong support [from Turks for the AKP].

How come U.S. investors are not panicking?

It is interesting, but it is also reaffirming; it says U.S. investors are long-term investors; they look at Turkey in terms of long-term growth and its potential for the next 10 years. U.S. investors are prepared to say, “OK, in bilateral ties, there have been cycles, but in the long term, we expect there to be good progress, a stable government and an ability for investors to get solid returns.”

One; the confidence that the government won’t suddenly move against their economic interests; two, they can repatriate their money when they wish to; three, there is a condition of economic law which they can rely upon. The last one is a bit shaky; it constitutes some of the element of risk; but that’s been priced into their investment decision already. I don’t think they see what’s going on now as a dramatic shift in terms of the risk which they had already assessed at the time they made the investment.

There are other positive developments. Turkey for three decades has had the overwhelming burden of a civil war with the PKK [Kurdistan Workers’ Party]. For 12 months now, we have had a democracy initiative and a cease-fire, which is holding. Certainly 12 months of this sort of durability for the initiative has the chance of creating a new normal in Turkey. That is the most positive thing that has happened in the last three decades.

Who is James Holmes?

Ambassador James Holmes (Ret.) is the President and Chief Executive Officer of the American-Turkish Council, a bilateral, non-profit organization dedicated to the strengthening of U.S.-Turkish trade, investment, defense and cultural relations, and to the promotion of awareness and understanding of U.S.-Turkish issues.

Ambassador Holmes is a 37-year veteran of the United States Foreign Service with overseas experience in Latvia, Turkey, Norway, New Zealand and Pakistan. He was Deputy Chief of Mission at the American Embassy in Ankara, Turkey from 1992-1995.

Subsequently, he was the President’s Coordinator for Assistance to Central and Eastern Europe, Ambassador to Latvia, Special Envoy for the Balkans, founder of the Department of State’s Office of eDiplomacy, and the Department’s Chief Knowledge Officer and Deputy Chief Information Officer.