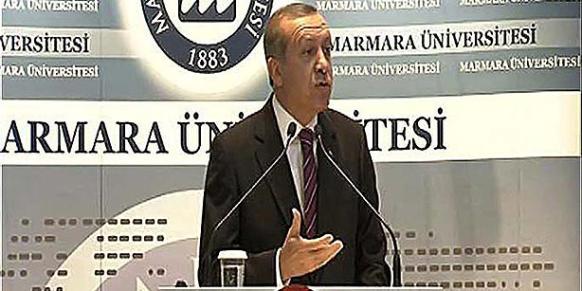 In a speech delivered at İstanbul-based Marmara University, Erdoğan said “there are new voluntary Lawrences, disguised as a religious man, a member of Hizmet, a journalist, a writer and a terrorist” who were bent on throwing the Middle East into the fire.

He noted that “Lawrence was an English spy disguised as an Arab,” recalling British officer T. E. Lawrence, better known as Lawrence of Arabia, who helped Arab leaders fight against the forces of the Ottoman State during World War I.

“Even now, they, modern Lawrences of Arabia, are fulfilling the terms of the Sykes-Picot agreement by hiding behind freedom of the press, a war of independence or jihad,” he said, referring to the agreement between Britain and France that carved up the Ottoman state into spheres of influence.

Erdoğan has ratcheted up his fiery rhetoric and hateful discourse against Gülen by calling him a “false prophet,” a “fake saint” and a “bogus scholar.” He has called the Hizmet movement a “parallel state,” a “gang,” an “illegal organization” and “raving Hashashins” — referring to an order of assassins of long ago.

On Monday Erdoğan added a new inflammatory name for the members of Hizmet by describing them as “Lawrences,” although he appeared to be also referring to terrorist groups the Kurdistan Workers’ Party (PKK) and the Islamic State of Iraq and the Levant (ISIL) and the foreign and international media within the same category.

Over the weekend, Erdoğan claimed some foreign powers, the national and international media, the PKK and Hizmet were behind the violent protests by Kurds over reports that ISIL was very near to capturing the town of Kobani, which is being defended by the Kurdish People’s Protection Units (YPG), a Syrian-based affiliate of the PKK.

Gülen’s lawyer filed criminal complaints against Erdoğan while dozens of members of Hizmet filed petitions with the Constitutional Court on charges of their fundamental rights being violated by the president.

In the meantime, the liberal Taraf daily reported on Monday that the Prime Minister Ahmet Davutoğlu government has been preparing a proposal to declare Hizmet a terrorist group in the upcoming National Security Council (MGK) meeting. The move was hinted at by Erdoğan during a speech in Rize over the weekend. If the proposal is accepted by the MGK, members of Hizmet may face criminal prosecution.
Turkey’s main opposition Republican People’s Party (CHP) deputy Umut Oran criticized Erdoğan’s remarks, saying the president cannot order the MGK or threaten a civic group. “This is a [constitutional] crime,” he said.

This is not the first time Gülen has been the target of a witch hunt. A similar smear campaign was staged in 1999 to build a prosecution case against Gülen. A number of lawsuits were filed against him during this process but he was acquitted of all charges, which was later upheld by the Supreme Court of Appeals on June 24, 2008.

The Islamic scholar has generally avoided responding to Erdoğan’s insults and offensive remarks but made it clear that he will strongly defend his convictions in Islamic teachings that prohibit corruption, favoritism and the peddling of influence. He also said he will continue advocating principles such as accountability and transparency in government, strengthening the rule of law and full respect for fundamental human rights.