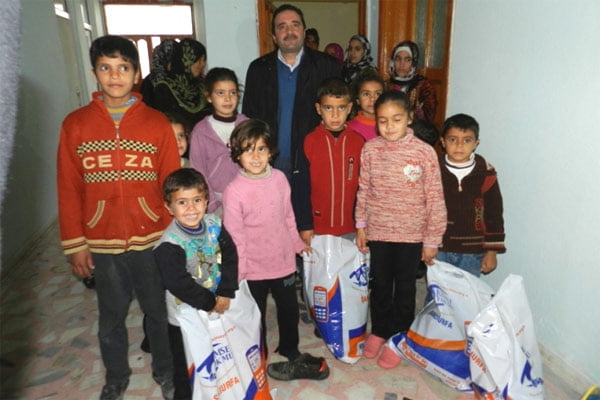 The Şanlıurfa office of Kimse Yok Mu, a Turkish charity, in cooperation with the Şanlıurfa Governor’s Office, provided food, clothing, blankets and cleaning supplies to 200 Syrian families living in the town of Akçakale on Dec. 21.

More than 120,000 Syrian refugees are taking shelter in camps in southern Turkey and more are expected to arrive as winter sets in and millions of people are estimated to be short of food inside Syria.

The charity’s chairman, Ünal Öztürk, was there for the distribution of the aid. He said: “We found out that our Syrian brothers and sisters who have had to flee from war in their country have barely been managing here. Even if it is only for a short period of time, we are here to show our solidarity with the Syrian people and to provide help to those in need. Most of the families we have visited so far have lost a brother, a husband or a son in Syria. We wish we could help all of them but for now we could only help 200 families.”

Thanking those who donated, Öztürk said, “It was enough for us just to experience their happiness when we distributed toys to these Syrian kids.”