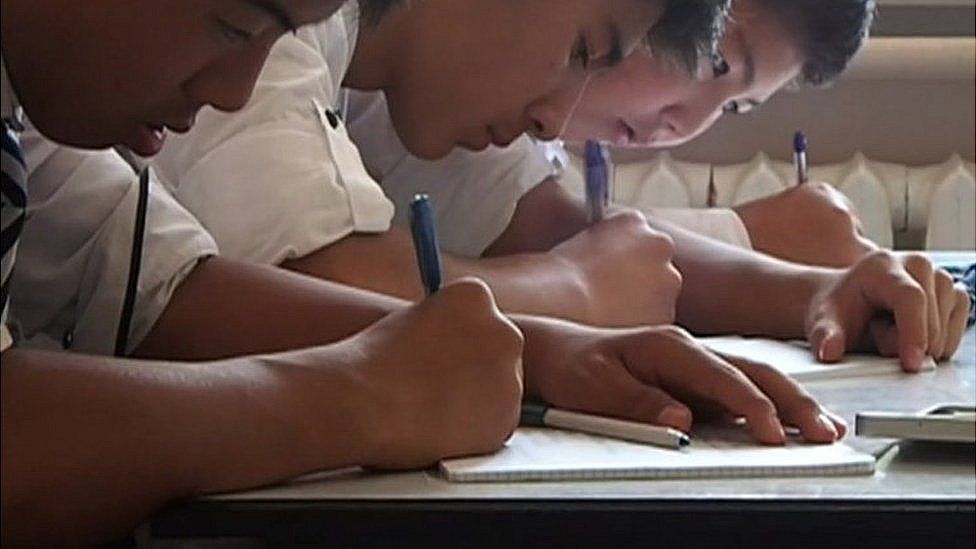 Pupils at one of the Gulen linked schools in Kyrgyzstan are taught in Kyrgyz, English and Turkish

Until mid-July, her main worry was getting the right grades for medical school.

Now Chilla and her fellow pupils are faced with Turkish accusations that their school has links to a terrorist organisation.

Kharisma Bangsa school is one of hundreds across the world that Turkey wants to shut down because they have links to a US-based cleric, Fethullah Gulen.

The cleric is held responsible by the Ankara government for the failed July coup in which more than 270 people died.

And Turkey argues the schools are part of a strategy to undermine the state.

But pupils, teachers and parents interviewed in several countries say they have no links to suspicious activities.

Kharisma Bangsa is one of nine Indonesian schools Ankara says should be shut down because of their alleged ties to Fethullah Gulen.

Turkey says the schools are part of a vast and secretive network which the Gulen movement has used to build a powerbase and infiltrate state institutions.

Accusations have been levelled against schools with Turkish connections in more than a dozen countries, from Germany to Afghanistan, leaving thousands of children facing uncertainty over their education.

Supporters of the schools say they are no more than a loose affiliation of institutions that share common values and are committed to academic excellence.

From extensive interviews with BBC World Service across 10 countries in three continents, it is clear that the schools have much in common but operate quite differently.

But all are feeling the pressure.

What is a Gulen school?

There is no common brand name for the schools.

In Pakistan they are called “Pak-Turk Lycees”, in Kyrgyzstan they are known as “Sebat” (Persistence) schools, and in Kenya, “Light Academies”.

Most were set up as partnerships between Turkish and local businesses and organisations, but in many countries like Indonesia and Kyrgyzstan, the Turkish partners are no longer directly involved.

Local and Turkish partners say they’re admirers of Fethullah Gulen, but not connected to him formally.

“A Gulen school, business or newspaper is generally unofficially labelled as such, because the owner or manager considers Fethullah Gulen as a spiritual leader or source of inspiration,” says Turkish academic Bayram Balci.

Alp Aslandogan, who speaks on behalf of Gulen-associated schools in the United States, says there are numerous social networks within the movement. “The schools which are seen as affiliated with the movement were started by people who belong to these networks.”

Followers of Fethullah Gulen often refer to their movement by the name Hizmet (service), and the schools all share the same ethics.

“The teachers put emphasis on character-building, morals, and discipline,” says Rosi, the mother of a pupil at Kharisma Bangsa.

“The children study every day until 3pm, then they have additional classes, activity clubs, and homework,” says Baktigul, whose daughter attends a Turkish school in Kyrgyzstan. “At 9pm they all sit down to have tea, and at 10pm it’s bedtime.”

For Maxim Urazaev, who graduated from a Turkish lycee in the Russian city of Kazan in 2009 the experience was “tougher than being in the army”.

How close to Gulen himself?

Head teachers have told the BBC the schools are not part of a formal structure.

The head of Kyrgyzstan’s 21 Sebat schools, Nurlan Kudaberdiev, says they are all connected to Fethullah Gulen informally because the schools were his idea. “But there’s no direct influence or financing from his side any more,” he insists.

Long before the Turkish government tried to shut the schools down, other countries took action of their own amid suspicion of the network’s foreign links.

In 2000, Uzbekistan shut down all Gulen-associated schools operating there, and similar steps were taken in Russia, where only seven remain of the 50 schools that used to operate until 2008. All are now firmly under Education Ministry supervision in the Turkic-speaking Muslim region of Tatarstan.

Are they secular or religious?

The schools describe themselves as secular, promoting tolerance and interfaith dialogue.

“In my five years at the school I never once saw a Koran or a Bible,” says Maxim Urazaev, from Kazan.

But in Russia and elsewhere schools have been accused of running extra-curricular and secret, religious study groups.

Many former Soviet countries are deeply suspicious of religious activity beyond state control.

A former teacher in Tatarstan rejected the idea of “secret gatherings” but told the BBC that pupils who wanted to could pray with their teachers and talk to them about religion.

In Kenya, former students and teachers showed us books by Fethullah Gulen that they had been given.

But her mother, Bakhtigul, said she was satisfied it was not a problem. “I even checked the books in their library to see if they had any Gulen literature or suspicious books, but there was nothing.”

Gulen-affiliated schools have existed in Turkey since the 1970s and only expanded into a truly global phenomenon in the past 20 years.

That expansion came as Fethullah Gulen grew closer to Recep Tayyip Erdogan, whose Islamist-rooted AK Party swept to victory in 2002.

By teaching Turkish and promoting Turkish culture the schools helped to reinforce Turkey’s position and influence across the former Soviet Union, the Far East and into Africa.

Somalia became a flagship for Turkish aid and investment, with three Gulen-linked schools catering for more than 1,000 children.

Although the schools are fee-paying and attract the children of the elite, they also offer scholarships to poorer families.

In Pakistan up to a quarter of children are on scholarships, in Afghanistan it is nearly 30%.

Quite apart from the lure of a good education, the schools also offer an opportunity to travel by way of inter-school competitions known as “Olympiads”.

Star pupils from Kabul have competed in maths and Turkish-language competitions in Uganda, while children from Mogadishu have tested their skills in Kazakhstan.

The schools say the competitions are a way of making a global network of friends.

But Turkey argues they enable a movement responsible for a deadly coup attempt to continue recruiting new members worldwide.

Which countries have agreed to Turkey’s school closure demands?

Thousands of children and their families have been left feeling vulnerable, and for many their future at the Gulen schools is unclear.

“I’ve been here for eleven years,” says Musukan, a sixth former at the Pak-Turk school in Islamabad. “This was the best time of my life. We love it here.”

“If Turkey really has problems, don’t involve us,” says Salwa, an Indonesian sixth former. “We’re only here to study and to pursue our dreams.”

Gulen schools around the world