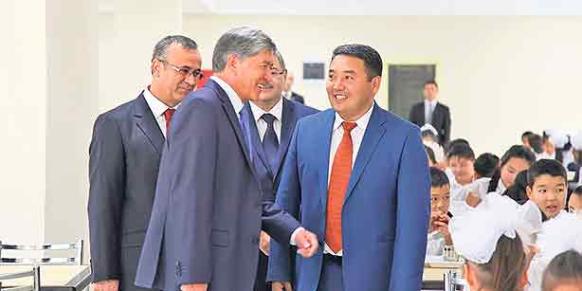 The Kimse Yok Mu association, renowned as a global charity that manages to reach the most remote corners of the world, has inaugurated a new boarding school in Kyrgyzstan for children without parents.

The new home for children, which is the result of a $2.284 million investment, was inaugurated by Kyrgyz President Almazbek Atambayev in a ceremony on Friday.

Kimse Yok Mu opened the home in response to a request from Atambayev made only four months ago. The orphanage is designed to be a residential and educational complex where Kyrgyz children in need of foster care will attend school.

Kimse Yok Mu means a lot to the Kyrgyz people, Atambayev said during his speech.

The Kyrgyz president noted that protecting orphans is a duty of all Muslims. “We are grateful to our Turkish brothers,” Atambayev said. He noted that he has served as a Kyrgyz district governor in the past, and that he has had the chance to visit many homes for children and the elderly. “In those days, people of Kyrgyz decent would be rare in those homes. The Kyrgyz people used to not abandon their children or parents. This has unfortunately changed in our day,” he said.

After the ceremony, Atambayev was shown around the educational complex and given information by the facility administrations.

The orphanage is hosted in a building that was constructed in the 1990s that was recently given to Kimse Yok Mu to renovate and turn into an orphanage. Kimse Yok Mu, which started working on the project in May, was able to collect all of its donations from its generous supporters within about four months.

The building has been completely renovated, and all the classrooms on the grounds make use of the latest educational technology. In addition to computer labs, the complex has a swimming pool and a sports hall.

Half of the students who have been enrolled — as a result of joint efforts by the school administration and the Kyrgyz administration to find and reach the orphans in need — have lost both of their parents; 20 percent have lost one parent and 10 percent are children who were taken from their families and placed in foster care. Custody of children in need of care is given to the principal of the school where they are enrolled under Kyrgyz law.

Rüstem Atayev, the principal of the school, said children who attend the facility will not only go to school here but also will be taught a vocation or trade for the future. Turkish and English as well as Korean will be taught in the school, Atayev said.

The school was named after Togolok Moldo, a famous Kyrgyz poet.