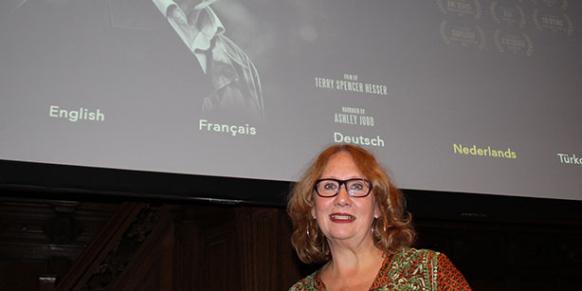 The three-time Emmy-winning director Terry Spencer Hesser is pose for the cameras under visual poster of “Love Is a Verb”. (Photo: Sunday's Zaman)

Terry Spencer Hesser, director of the first feature-length movie about Fethullah Gülen and the Hizmet movement, a grassroots initiative inspired by the Islamic scholar, spoke to Sunday’s Zaman at the Strasbourg screening of the biopic titled “Love Is a Verb,” on everything, from the Dec. 14, 2014 police raids on news outlets to President Recep Tayyip Erdoğan’s defamation campaign against Hizmet-affiliated schools, saying, “If we don’t have freedom of speech and media freedoms, we’re all slaves.”

The three-time Emmy-winning director began by talking about the December police operations at the Zaman daily and Samanyolu Broadcasting Group, saying, “When the tragedy happened in Paris [at Charlie Hebdo], last month… I’m not comparing these, but the Turkish government marching into newspapers or television stations and arresting not just journalists but fiction writers, and jailing them… They’re not taking away their lives, but they’re taking away their liberty, which is really close.”

Hesser, who lives in Chicago, continued: “They’re taking away the liberty of all of the people who know about this [government graft investigations that went public on Dec. 17 and 25, 2013] and who are going to be scared, as well, so I think it’s very similar tactics but without the bloodshed. I just think it’s very bad.”

A total of 17 people died when gunmen linked to Yemen’s offshoot of al-Qaeda attacked the Paris office of French satirical magazine Charlie Hebdo and a kosher supermarket in the city on Jan. 7.

On Dec. 14, 2014, police operations were carried out at the buildings of Turkey’s best-selling daily Zaman, and the Samanyolu Broadcasting Group, both headquartered in İstanbul. Zaman Editor-in-chief Ekrem Dumanlı and as well as Samanyolu TV chief executive Hidayet Karaca, along with dozens of journalists, scriptwriters and police officers, were detained in a number of operations that took place around the country. Karaca and Dumanlı have been charged with heading a terrorist group based on a TV series broadcast years ago on the Samanyolu TV channel and a few newspaper articles. Dumanlı was released on Dec. 19, 2014, pending trial, while Karaca is still being held in custody until the trial.

Replying to a question about whether she thought that Hizmet really did stage a coup via the graft investigations as President Erdoğan and many Justice and Development Party (AK Party) officials have claimed, Hesser said: “No. It looks like a convenient defense [for the AK Party].”

“It’s a pretty smart defense. Because I don’t think the rest of the world knows enough about Turkish politics or Hizmet to really be able to make any kind of an in-depth analysis or sound judgment,” Hesser said. “So, really, you’re going to go with ‘Who do you trust?’ The president of a nation or a movement you’ve never heard of?” she added.

According to Erdoğan and his associates, the charges brought forward by Istanbul prosecutors on Dec. 17 and 25, 2013, are in fact a sinister attempt to topple the AK Party government orchestrated by Hizmet sympathizers and affiliates within the Turkish state and bureaucracy, including the judiciary and the police force. The movement, which suddenly found itself on the defensive, has been vehemently denying the allegations put forward by government circles, calling them baseless accusations designed to obscure the corruption allegations.

“I think Erdoğan has a tough job right now with a million Syrians [refugees] on the border. He’s got a lot on his plate,” said Hesser. “[And] I think he’s so afraid of losing power that he does what everyone does when they’re afraid: find a scapegoat.”

The published novelist, biographer and playwright is very familiar with the grassroots initiative’s activities both home and abroad. “And he’s [Erdoğan] finding a very convenient scapegoat in Hizmet. Hizmet is a powerful voting bloc, but more importantly, the people of Hizmet cannot be bought.”

Hesser: Campaign against Turkish schools around the world stems from paranoia

As someone who has extensively researched the Gülen-inspired schools around the world and even produced a documentary featuring them, Hesser pointed out that President Erdoğan’s recent campaign in Africa urging national leaders to close down the schools stemmed from “paranoia.” “If you’re a hammer, everything looks like a nail. If you’re paranoid, everything looks like a source of danger. I think he [Erdoğan] is just trying to eliminate whatever he thinks is dangerous,” she said.

Erdoğan attempted to have Hizmet movement schools in Pakistan shut down in March 2014, and in Kenya and South Africa in April 2014, beginning what seems to be a worldwide tour of negative campaigning aimed defaming and closing Hizmet-affiliated schools and promising African leaders that the Turkish Ministry of Education will open new schools in their stead.

“The question is whether these African countries are going to actually believe that he [Erdoğan] will come through on his promises. What would the standard of teaching will be? Who would those teachers be?” Hesser pointed out. “It’s not that I don’t expect African nations to do what’s in their best interests. The question is how much can they [African nations] be bought now?”

When asked about whether she thought Turkey was distancing itself from its previous alliances, especially with the US, and rupturing ties with the West, Hesser said, “I think it’s too bad, because America is losing its only partner in the Middle East that has the same kind of roots.”

“I mean we are also a polyglot nation of all different ethnicities, and are united under the banner of ‘We’re Americans,’ just like the Turks are,” said Hesser, continuing, “And I think for a while everything looked like it was turning around, like Turkey was so progressive, and tourism was amazing, and everyone couldn’t wait to go to İstanbul… and now, not so much.”

Regarding the Hizmet movement, Hesser said that at first it felt strange. “In the beginning I couldn’t believe it. I had to say ‘What?’ to everything. But now that I believe it [what’s happening with Hizmet], I’m also a little bit awed by it.”