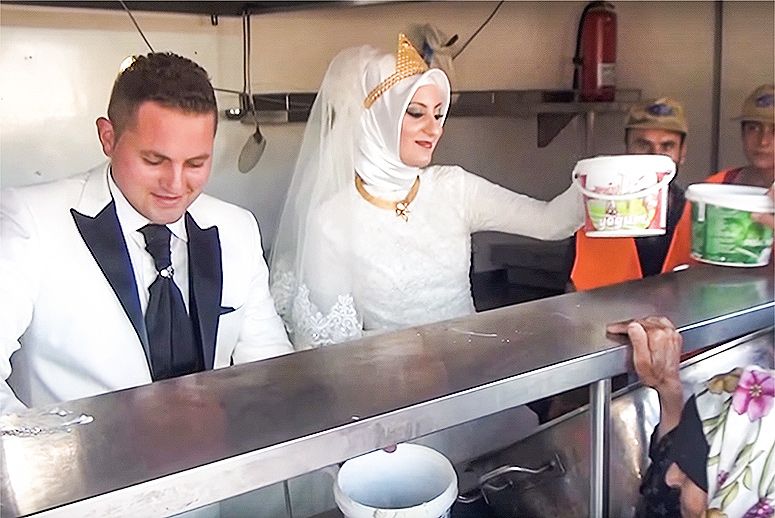 Turkish couple who got married last week invited 4,000 Syrian refugees to celebrate with them.

Fethullah Üzümcüoğlu and Esra Polat tied the knot in Kilis province on the Syrian border, which is currently home to thousands of refugees fleeing conflict in the neighbouring country.

It’s traditional for Turkish weddings to last between Tuesday to Thursday, culminating in a banquet on the last night, but this couple decided they wanted a celebration with a difference.

Hatice Avci, a spokesperson for aid organisation Kimse Yok Mu, told i100.co.uk that the charity is responsible for feeding 4,000 refugees who live in and around the town of Kilis, but last Thursday the newlyweds donated the savings their families had put together for a party to share their wedding celebrations with the refugees living nearby instead.

It was the groom’s father, Ali Üzümcüoğlu, who originally had the idea to share a bit of wedding joy with those less fortunate.

I thought that sharing a big delicious dinner with our family and friends was unnecessary, knowing that there are so many people in need living next door. So I came up with this idea and shared it with my son. I’m very happy that he accepted it and they started their new happy journey with such a selfless action.

I was shocked when Fethullah first told me about the idea but afterwards I was won over by it. It was such a wonderful experience. I’m happy that we had the opportunity to share our wedding meal with the people who are in real need.

The wedding guests banded together to operate the food trucks and share the banquet with refugee families:

The bride and groom helped distribute the meal themselves and took their wedding pictures with people at the camp, according to local media.

Groom Fethullah Üzümcüoğlu said that he’d never taken part in something like this before but it was the “best and happiest moment of my life”:

Seeing the happiness in the eyes of the Syrian refugee children is just priceless. We started our journey to happiness with making others happy and that’s a great feeling.

Fethullah said that his friends were so inspired by the day that they’re planning on similar events for their own weddings.