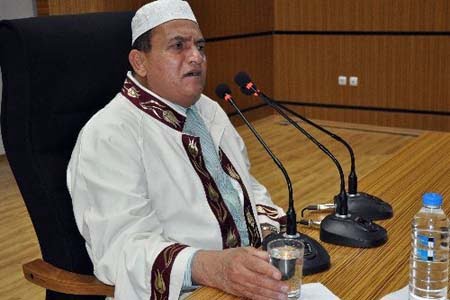 Naina recited Qur’an at the event held by Mardin religious officials in Cuneyt Yuksel Mosque as a part of “The Blessed Birth of Muhammad (pbuh)” activities. Following the isha prayer, Naina gave a feast of Qur’an recitation to Mardin people who showed a high attendance.

The president of Mardin Association of Religious Officials, Serdar Okmen noted that they have been telling about the Prophet Muhammad (pbuh) through “Prophet Love” events in nine districts of Mardin as a part of the Blessed Birth activities. “Prophet Love” overflows into streets in Mardin. Our people’s love for the Prophet is so deep. And we, as the foundation officials, get them listen to Quran recitations by world-famous hafizes” Okmen said.

After the recitation, the Egyptian hafiz Dr. Ahmed Naina praised the Turkish schools inspired by Fethullah Gulen. He underlined that the schools seed peace and love around the world. Speaking of the schools operating worldwide Naina said, “I first visit the schools, inspired by the Honorable Fethullah Gulen, in every country I go to. I have been to even the one in Midyat and very much liked it. And now I see that he inspired five of them in Mardin which pleased me a lot.” He went on to say “These are great services for humanity. They should be appreciated. I hope these services will continue. I cut the ribbon on Salahaldin Turkish School in Egypt and recited Qur’an at the school in the city named “New Cairo”. May Allah be pleased with those initiating these services.”