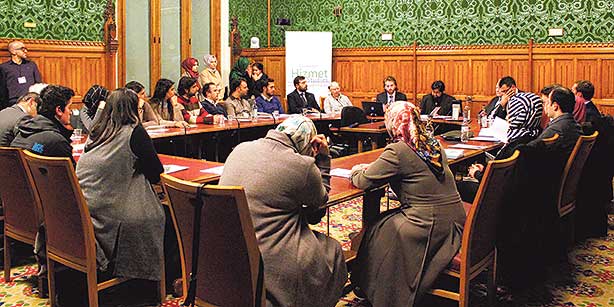 The conference at the House of Lords was attended by various academics, journalists, scholars and opinion leaders from a number of countries. (Photo: Today's Zaman)

At a time when the faith-based Gülen movement, also known as the Hizmet Movement, is under heavy government pressure in Turkey, Lord Maclennan of Rogart, academics and scholars have praised the movement at a panel at the House of Lords for its efforts against the spread of radical Islamism and violence across the world.

The panel, titled “Hizmet Movement’s Solution for Radicalism” and organized by the Center for Hizmet Studies, was held in London on Oct. 22, 2015 at the House of Lords.

The conference was attended by the House of Lords, various academics, journalists, scholars and opinion leaders from a number of countries.

Speaking at the panel, Lord Maclennan of Rogart stated that the Hizmet movement is doing wonderful work in the face of radical threats, which “at the moment are very severe.”

“Those of you who are committed to this [Hizmet], deserve the thanks of all other religions — Christians, Jews and the various branches of Islam. We need to see the toleration of differences of opinion. The previous speaker has spoken of God creating people not alike but with different views about religion and that seems to be very true. I hope this group of people will disseminate this message throughout not only this country but in other countries. We need to have tolerance. We need to have respect for other people’s religions,” Lord Maclennan stated.

Dr. Ismail Mesut Sezgin, the director of the Center for Hizmet Studies who was also among the speakers, called the Hizmet movement an “Islamic-inspired, grassroots civil society movement” and stated it has a presence in over 160 countries.

“It’s core teachings, practice and refutations of violent extremism originate from its robust interpretation of the Quran and Sunna. Therefore, the question of what Hizmet thinks about, and how it responds to, violent extremism is most relevant to those concerned with this issue,” Sezgin stated.

The Gülen movement puts special emphasis on educational activities and inter-religious dialogue. There are more than 1,000 schools in 160 countries that are affiliated with the movement.

However, since a major corruption probe became public on Dec. 17, 2013, implicating people close to the Justice and Development Party (AK Party), schools, media outlets, publishing houses and even NGOs close to the Gülen movement have been targeted by the government.

The AK Party and President Recep Tayyip Erdoğan have accused sympathizers of the Gülen movement, especially those in the police force and the judiciary, of being part of a plot to topple the government by carrying out the graft probe. However, Erdoğan and AK Party circles have yet to present any concrete evidence proving their accusations. The movement has strongly denied all claims.

Özcan Keleş, chairperson of the Dialogue Society and PhD candidate in Human Rights Law, stated during his speech that Hizmet does not attempt to defeat violent extremist ideology or practice by meeting it head on.

“Rather, the core Islamic teachings that underpin [Hizmet’s] values and activism negate the violent extremist ideology, mindset and practice as a natural by-product and default outcome of its positive work. Those core teachings are popularized among the wider public through a series of channels and practices acting as conveyors Hizmet’s core teachings and the values and activism they underpin are diametrically opposed to and mutually exclusive with those associated with violent extremism. Therefore, the stronger one grows, the weaker the other becomes. Accordingly, the goal of defeating extremism is made to ensue without being directly and aggressively pursued, ensuring it avoids the pitfalls associated with being reactive — hence the term de-radicalization by default,” Keleş stated.

According to Keleş, the views of the Islamic scholar Fethullah Gülen on violent extremism and terrorism are not conjectural but authentic and fundamental.

“His [Gülen’s] condemnation of such acts has been unequivocal, consistent and also proactive, as he and Hizmet collectively develop and disseminate a positive counter-narrative, undermining a violent extremist ideology and worldview,” Keleş stated.