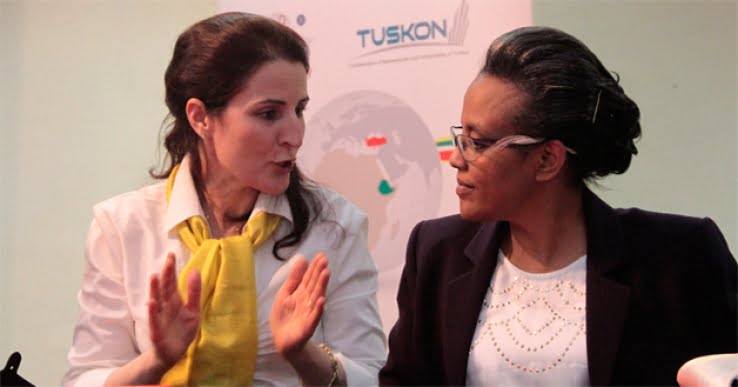 The first-ever delegation of businesswomen from Turkey visited and held business meetings for three days in the capital.

The meetings have been organized by the first lady, Roman Tesfaye, who in June, had led Ethiopian delegates to Turkey.

The business-to-business meetings with Ethiopian counterparts were held at the Ethiopian National Archives and Library Agency, where 25 businesswomen were represented from the confederation of businessmen and industrialists of Turkey (TUSKON). According to Saime Yildiz, head of the delegation, the group came for the first time representing women-owned businesses from TUSKON.

First Lady Roman told reporters that the visit and the business-to-business meetings were organized by her office, which, according to the first lady, is an opportunity to nurture business environments from both sides. She said another group of Ethiopian business owners are looking for more exposure to the Turkish business climate. The first lady also noted that women engaged in the textile and garment and leather sectors are making use of the global market. According to Roman, in pursuit of support for those women investors, she (Roman) will work on assisting women who are excelling in their career. She also said that she would assist those who will work in providing job opportunities for the most marginalized women in the society.

The first lady is known for instigating an initiative dubbed “Connecting 1500 Women and Young Girls to the Export Market,” which among others will provide opportunities for women entrepreneurs to have access to foreign markets. One of such business owners is Bethlehem Berhane, founder and owner of Entoto Beth Artisan located around Entoto Mountain in the northern part of the capital. Bethlehem told The Reporter that she employees 145 staffs, out of that 128 are women from the most deprived parts of the Entoto locality. Being part of the delegation in June, led by the first lady, she said she had found Turkish suppliers for her company. Bethlehem noted that currently her company exports jewels and leather goods to the US and European markets.

She said she is venturing on to expand her business to processing metal accessories aimed at substituting importations of accessories and related inputs. That said, the new planned expansion will cost some 22.5 million birr and will employ some 300 women. Yildiz told The Reporter that companies like Entoto Beth Artisan are getting momentum because they are more focused on social business activities. She went on to say that the impacts of the likes of Bethlehem surfacing are appreciated in the outside world.

The Turkish businesswomen, according to Yildiz, are extending their stay in town for ten days to look more into big enterprises so that they might have more mutual foundations on the business prospects.

According to Gashaw Debebe, secretary general of the Ethiopian Chamber of Commerce and Sectoral Association, the two nations have enjoyed relationships since way back in the days of the Ottoman Empire. First lady Roman said that both Turkey and Ethiopia have a trade volume of USD three billion. She also mentioned that there are some 350 Turkish companies investing in Ethiopia, out of which she named Ayka Addis Textile and Bmet Cables manufacturers.