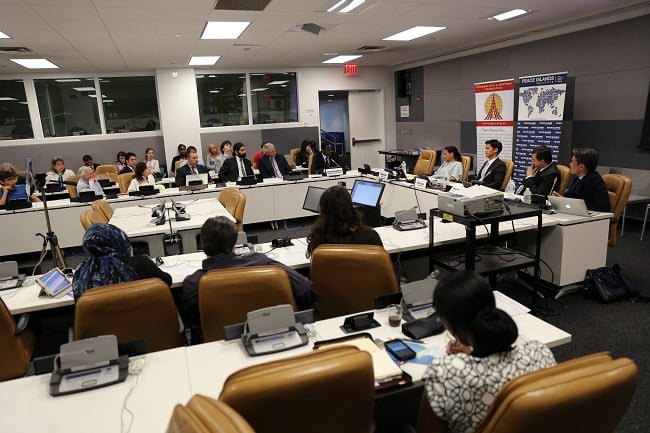 July 8, 2014. Journalists and Writers Foundation (JWF), in partnership with Peace Islands Institute, organized a discussion panel during the 2nd Session of the High-Level Political Forum on Sustainable Development at the United Nations Headquarters. The panelists discussed that education was one of the key factors that affected all dimensions of sustainable development and could enhance the integration of the dimensions in a cross-sectoral manner. Apart from being one of the sustainable development goals (SDGs) itself, education has a transformative characteristic that, if delivered properly, can significantly trigger equitable economic development, increase social inclusion, foster environmental sustainability and improve governance.

Galymzhan Kirbassov, UN representative of the JWF and adjunct lecturer in Columbia University, moderated the panel and introduced the topic to the audience. He summarized scholarly works on the topic and showed the effects of education on economic, social, environmental dimensions and governance. Education, according to his conceptual model, is at the center of the SDGs and can play a bridging role among the dimensions.
Huseyin Hurmali, Vice President of the JWF, highlighted importance of high quality education provided by non-for-profit schools. He particularly explained how schools in 160 countries, established by NGOs that were inspired by Fethullah Gulen, have been making a difference by educating children to become leaders of homegrown development. These educational institutions also contribute to the culture of peaceful coexistence in their respective localities because in many conflict zones students come from different religious and ethnic backgrounds.
Robert Alcala, research fellow and adjunct assistant professor in Columbia University, pointed out that the relationship between education and governance is complex. While studies suggest that education is significant to reduce corruption and improve accountability, we should not neglect the negative effects of corruption on education. Dr. Alcala explained how corruption in government sector and large private contractors could cause deaths of children because of poorly constructed school facilities and how textbooks were insufficiently delivered to the schools. In short, he argued that corruption was not victimless.
Swadesh Rana, senior fellow at the World Policy Institute and UN representative of the Academic Council on the UN System (ACUNS) and former chief of the Conventional Arms Branch at the UN Office of Disarmament Affairs (UNODA) at the United Nations highlighted two points that are essential to realize. One is that the nature of conflicts has dramatically changed and became more within societies rather than between states or between groups in a given country. Second, she argued that girls’ education itself became a source of conflict. The cases of Malala Yousafzai and girls abducted by Boko Haram in Nigeria showed that educating girls in some societies could become extremely dangerous. Dr. Rana stressed that it was important to guarantee safety and security to the school in many regions to educate children.

As a graduate of the Light Academy schools in Kenya, Dominic Deo Androga shared his own experience with the schools Mr. Hurmali was referring to. Established by the Turkish NGO, these schools in Kenya were successful not only in national exams, but also in international science and technology competitions, which is crucial for sustainable development.