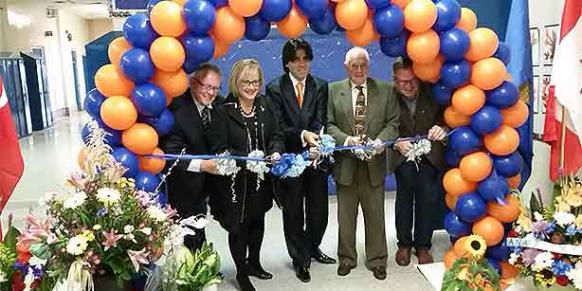 A view from the opening ceremony of the Nebula School of Art and Sciences. (Photo: Today's Zaman)

The city of Edmonton in Canada has joined the long list of locations for schools opened by a Turkish entrepreneur affiliated with the Hizmet movement, one of the largest faith-based communities in Turkey.

The new educational institution in Edmonton was recently opened by the Nebula School of Art and Sciences.

Zehra Zümrütpınar, the school’s principal, told Today’s Zaman that there is growing interest and demand for private schools in Edmonton. “We believe we will have many students in the future,” she stated.

Nebula School of Art and Sciences rented the facility from Edmonton Public Schools. The Anatolian Cultural Centre, the Intercultural Dialogue Institute and the Sunrise Educational Foundation will serve the community as well as the school.

The Hizmet movement administers a wide network of schools and more than 2,000 educational establishments in more than 120 countries around the world. These schools provide education to thousands of students and are well known for their achievements in the International Science Olympiads.