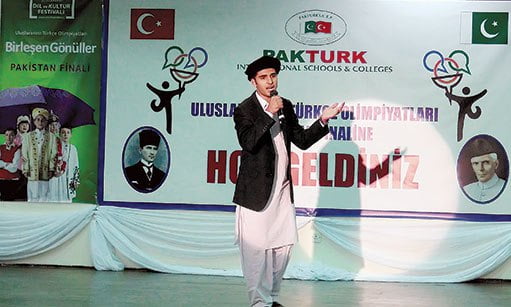 Independent deputies who attended the Pakistani leg of the annual International Turkish Olympiads, held in the Pakistani capital of Islamabad on Monday evening, have praised the event, stating that the event itself is the best response to unpleasant voices against the Hizmet movement, which is inspired by Turkish scholar Fethullah Gülen.

The Pakistani finals of the 12th Turkish Olympiads, a festival that celebrates the Turkish language and brings together thousands of students from 140 countries every year, were held on Monday evening. At the finals, 170 Pakistani students competed with each other to be able to attend the main competition, which will be held in Turkey in May and June. Hundreds of spectators attended the event.

Independent İzmir deputy İlhan İşbilen was among the attendees. Speaking at the event, İşbilen said that the songs and poems recited by students as part of the Turkish Olympiads suppressed unpleasant voices against the Hizmet movement, adding that actually it does not matter what those voices have said; the students’ songs and poems were enough to respond to those unpleasant words.

The Hizmet movement has been put under the spotlight by circles close to the Justice and Development Party (AK Party) government since a corruption scandal was made public on Dec. 17 of last year, in which three Cabinet ministers’ sons, many state bureaucrats and renowned businessmen were accused of giving bribes in exchange for favors. The government has accused the Hizmet movement of participating in a subversive plot behind the corruption investigation.

Another attendee of the event, independent İstanbul deputy Muhammed Çetin, addressed the Pakistani Olympiad students and said, “Despite all the storms brewing in Turkey, your performances today have helped us feel like it’s springtime.”

Addressing teachers working at Turkish schools across the world, Çetin said: “You are very self-sacrificing individuals who do your jobs despite what is currently said [against the Hizmet movement]. No matter what they say, please do your jobs. You are trying to cultivate the best fruits and roses [students] amid difficult conditions. Please don’t listen to those who don’t see and smell the roses. May God grant you success.”

Independent Burdur deputy Hasan Hami Yıldırım also attended the event. He said that the success of Turkish schools in Pakistan and the high-quality education provided at those schools have been accomplished by Turkish teachers working devotedly. “We have listened tonight to many students who are young but who have big hearts. Those students cannot be part of a [political] party of hatred, slander or fights. Those students can only be part of peaceful parties. Those students are not here to destruct the heart, but to conciliate hearts,” Yıldırım added.

A total of 170 students competed in the Pakistani finals on Monday evening, thrilling the spectators. The students performed Turkish songs and poems in the competitions. Zuha Nur from Lahore Girls’ High School came first in the singing competition with the Turkish song “Yaralı” (Injured), while Moliya Asif, again from the Lahore Girls’ High School, ranked first in the poem recitation competition with the Turkish poem “Ben seni hiç sevmedim ki” (I never loved you).